I used to wonder if my sleeping self were a completely different creature than the waking me who’s typing this now. My sleeping self, I thought, had his own personality, his own urge to survive, and simple wants: to be left alone so he could survive – which meant, of course, not waking up.

My sleeping self could carry on a short conversation. He might promise to do anything, if it seemed like once he’d made the promise, he’d get to survive (sleep). He even might answer the phone and do those things remotely. Once he picked up the phone and just said “Why are you doing this to me?” before he hung up.

He had a fairly short window in which to make the world go away because after a couple of minutes the waking me would take his place. So he was wily. Often enough I found myself dealing with what he’d done as my day went on.

But the sleeping me was nothing compared to the alternate self of Galloway Gallegher, as we see in this collection of short stories by Henry Kuttner.

Gallegher, says Gallegher, does science by ear. He doesn’t know how. Somehow – in spite of not having a lot of formal training – his subconscious has picked up a lot of knowledge along the way and if his conscious mind just gets out of its way it can do such amazing things that it makes him the most gifted – if unusual – inventor in the world.

Fortunately for his subconscious, this happens when Gallegher is supremely drunk. It’s fortunate because that happens pretty often.

And that’s the setup for each of these stories – because although Gallegher (drunk) can solve just about any problem that’s presented to him he does it "by ear", using whatever materials are at hand – and sometimes, whatever he can have delivered. He doesn’t make notes, and he’s suspicious of any attempt to record what he’s up to. He’ll meet with clients, cobble together some bizarre machine to solve their problems – often more than one at a time – and then pass out, leaving Gallegher (sober) to try to figure out what’s happened. Why, for example, he now has a machine that’s eaten all the dirt in his back yard and does nothing else except to sing "Saint James Infirmary". And, just as often, why everyone seems to be out to get him.

I remember Henry Kuttner mainly for his fantasy stories from the 1940s and 1950s. They were among the many pulp stories reprinted when I was young. Discovering these, though, was a great pleasure – they’re science fiction screwball comedies, and I just wish there were more of them.

Four of the five Gallegher stories were written in 1942 (under the name Lewis Padgett), before Kuttner went off to war. The last was published in 1948. The near-future world of these stories is one in which rapid changes in technology have confused matters a bit – especially in the legal system – and that makes us feel right at home there, doesn’t it?

These stories were first gathered together as a book in 1952. This Planet Stories edition has a new cover by Tomasz Jedruszek and some fine interior illustrations by Brian Snoddy, a new introduction by F. Paul Wilson, and the original 1952 introduction by C.L. Moore – Kuttner’s wife, herself the author of Shambleau and the Jirel of Joiry stories.

This entry was posted on Monday, December 28th, 2009
and was filed under Reading / Watching / Consuming
There have been no responses »

A couple of weeks ago I posted the first in a series of articles about my experiences in putting together a single web site that combines products from several different print-on-demand companies. For a better idea of what I was trying to do, and what I felt the design priorities were, you should have a look at that article.

You’re back? Okay then.

In order to get the basic function of the site working, I used three different solutions from three different sources. I’ll be writing about each of them in detail as we go. For today, let’s start with an overview of those three solutions.

They are CPShop, for Cafepress content; the Zazzle Store Builder (ZSB) for Zazzle content; and myPFStore, for Printfection content. Here’s a basic description of their features.

END_OF_DOCUMENT_TOKEN_TO_BE_REPLACED

This entry was posted on Friday, December 11th, 2009
and was filed under Print On Demand, Web Development
There have been 2 Responses » 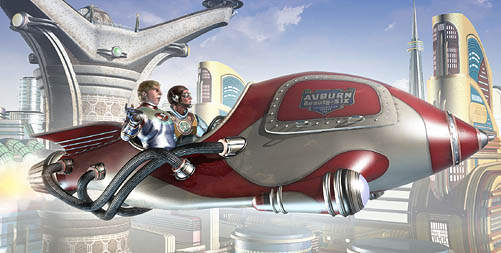 Well! This morning I’ve hit another little milestone for Thrilling Tales of the Downright Unusual – I finished an illustration that completely wraps up one of the two interactive branches of the story’s first half. The other branch is quite far along too, but it – and the remaining illustrations for the latter half of the story – needs one more complex environment, a simpler environment, and some work on two characters. Still, it’s really nice to see such big chunks of the tale coming together.

I’m really happy with this latest batch of pictures. That only reinforces the idea, though, that I’ll need to go back and rework a few of the ones I did earlier! But although there’s no light at the end of the tunnel I at least figure that I’ve got a lot of dark tunnel behind me now.

Once the illustrations are done I’ll need to go back to the web site itself to incorporate a few changes in the way the stories are presented and add a couple of features that were just waiting for real live content. In fact I’m also removing a feature – or modifying it, anyway – which it turns out I haven’t had a use for.

It looks as though I’ll soon have to set Thrilling Tales aside for a bit to get to work on a freelance job, but I’m not too worried. Part one of The Toaster With TWO BRAINS should still be ready some time in the first quarter of next year. In its web version, anyhow. Print’s another story entirely!

This entry was posted on Thursday, December 10th, 2009
and was filed under Thrilling Tales of the Downright Unusual, Works in Progress
There have been no responses » 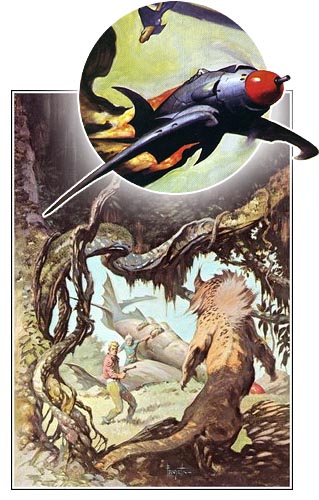 Mister Doortree’s Golden Age Comic Book Stories – which doesn’t limit itself to comics, but also features collections of work from all sorts of illustrators – has punched my buttons yet again with this gallery of art by Frank Frazetta.

Some of the pieces are collaborations with Roy G. Krenkel, and they come from the old Ace paperbacks of Edgar Rice Burroughs from the sixties and early seventies… which are the editions I read, as it happens, and I’m sure that contributes to the button punching I mentioned.

The big one at right is one of my favorites, and one I wish had been offered as a print (I’m pretty sure it never has). It and a few of the others are from Burroughs’ Venus series, which is the series I continue to like best, and whose Frazetta covers I’ve always also liked in gobs and cartloads.

This entry was posted on Tuesday, December 8th, 2009
and was filed under Found on the Web
There have been 3 Responses »

There have been several announcements about Buck Rogers revivals over the past couple of years, and I can’t say I’ve been too excited about any of them; but I find that I do like this teaser for an announced web series based on the original, 1928 Buck. I’m a little mystified by the announcement that Gil Gerard, star of that 1970s version that still gives me stomach cramps, is somehow involved.

But what’s not to like about this shot? Fingers crossed.

There’s a web site with that new car smell right here, and forums over here. It looks like filming started in late September for a late 2010 launch.

This entry was posted on Wednesday, December 2nd, 2009
and was filed under Found on the Web
There have been no responses » 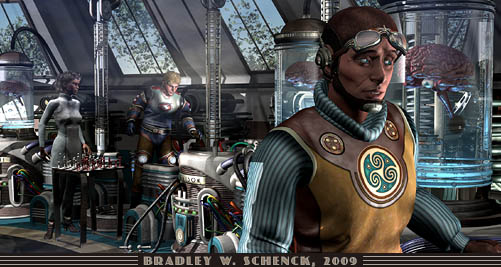 So now that I’ve got my new Retropolis web site up and running and ticking over quietly, I’ve finally gotten back to illustrating the first story for my Thrilling Tales of the Downright Unusual project. Here’s the third of the new batch. Click it to embiggify.

Here Nat Gonella and Ray Noble are investigating the theft (or, according to some, the kidnapping) of an encanted brain at the Bel Geddes Neurological Institute. The only witnesses would be the other brains, and they say they were all asleep. It’s pretty hard to read their body language, so maybe that’s true, and maybe it’s not.

The interview nodes were the most complicated to set up in this mildly interactive format. I had to diagram them to make sure I’d covered all the conditions. (In fact, I’m thinking about using flow charts when I plot out the next episode).

Several of these story nodes are so similar that they share the same illustration. So this scene is shaping up to need need nine pictures for its fifteen nodes. That’s actually a pretty dense ratio of illustrations to text, which is why this is taking so long to complete.

I did a lot of pretty smart work when I set up the authoring system and that really simplified the tasks of creating and editing the story nodes. But as good a job as I did there, the bottleneck is the number of the illustrations. Sometimes I think that – which will make story updates infrequent – is a thing that’ll keep Thrilling Tales from getting as wide an audience as, say, a webcomic site. There may be a fundamental problem there, I’m afraid.

This entry was posted on Tuesday, December 1st, 2009
and was filed under Thrilling Tales of the Downright Unusual, Works in Progress
There have been no responses »