Much to my own surprise – in my capacity as The Guy Who Sees the Sales Numbers – Tor Books will release the trade paperback edition of my Slaves of the Switchboard Of Doom tomorrow. It’s up on Amazon already with a preorder price of $10.99.

They sent me a few copies last week, so I can tell you they’ve done a pretty good job on this less prestigious edition. You (naturally) lose the wraparound dust jacket, and you get just 50% of the endpaper art.

I was curious about how they’d handle that: you seldom see a trade paperback with printing on the inside covers. The way they approached it was to keep the side of each endpaper that features the book title, and although that means some important character vignettes are missing it’s probably as good a solution as any. Those characters are more likely to show up in the other illustrations anyway, I guess.

Still, it’s worth mentioning that the hardcover price is dropping with the new edition’s release. In hardcover the book has lovely, heavy paper, the ends of the cover art, and the complete endpapers. The hardcover would still be my first choice.

But whichever edition you choose, Slaves of the Switchboard Of Doom stands ready to serve all your humorous, retrofuturistic needs.

There’s the eBook version too, of course. I assume its price will drop once the paperback is released tomorrow, but I don’t know by how much, or when. The world is just chock full of things I don’t know. You get used to it.

This entry was posted on Monday, November 26th, 2018
and was filed under Slaves of the Switchboard of Doom, Thrilling Tales of the Downright Unusual, Works in Progress
There have been no responses » 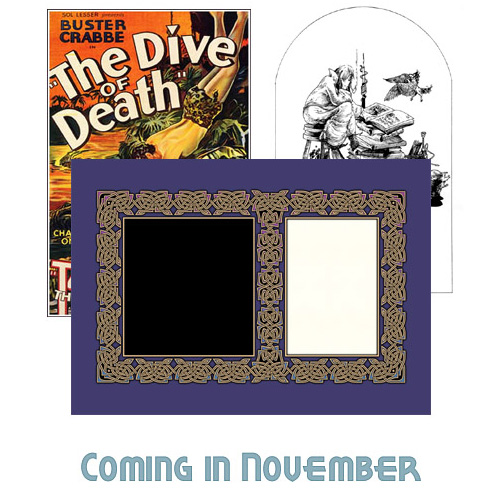 November 6 (for Patrons at $5 and above)

Chapter 2 of the first draft for a sequel to Slaves of the Switchboard of Doom. We’ll find out what’s put Dash into such a terrible state, meet some old friends (and some new ones) and learn how Nola’s career is looking up, apart from the explosions.

Note: Because of the way I’m alternating Celtic and fantasy art and writing with their Retropolitan counterparts, $5 backers are only getting three of the six chapters. It’s weird.

The Technique of Theodoris is a short story with a title illustration from around 1978. It’s work I signed with my Morno signature; and I have a few words to say about Morno, too.

The Dive of Death remembers how I was warned about a bar in town and never went there, then warned other people not to go… without actually knowing whether the stories were true. That’s a strange thing to do.


So, as always, $15 patrons will see something every week while the rest will see one, two, or three updates. I hope you enjoy them!

This entry was posted on Thursday, November 1st, 2018
and was filed under Works in Progress
There have been no responses »