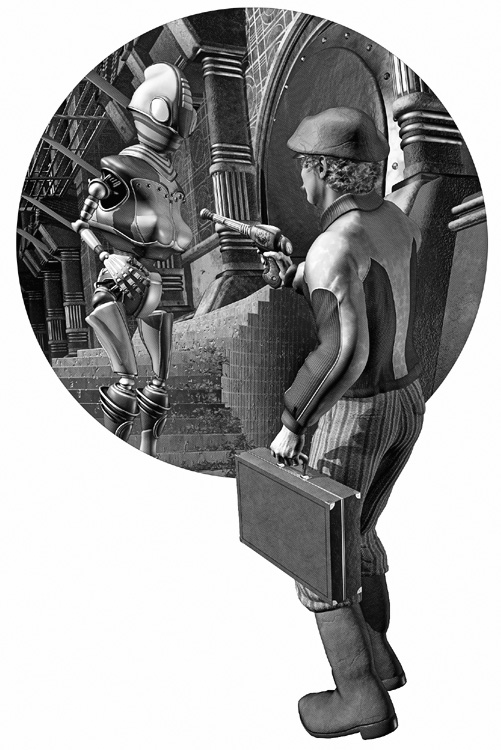 The Files of the Retropolis Registry of Patents

Well, Patently Absurd is very nearly a book. A few days ago I finished the last illustration for The Enigma of the Unseen Doctor, the final story in my series about The Retropolis Registry of Patents, and after that I completed the layout for the print book.

But just having all the stuff for a book isn’t quite the same as finishing a book. Very soon I’ll set up the first proof for the print edition, and that’ll show me all the things that weren’t actually done even though they seemed to be; mainly, that means some adjustments to the illustrations so that they print better. And then there’s the layout for the eBook edition, which is more complicated than usual when you’re dealing with illustrations.

Oh, and those illustrations? There are forty of them. Forty, in a book of about 260 pages.

The first five stories in the volume were serialized at Thrilling Tales of the Downright Unusual, and I wanted an illustration in every page update: that meant an illustration for every 1000 words. I backed that off a little bit for The Enigma of the Unseen Doctor, but it’s the longest story of the bunch by far. So, forty illustrations, plus the title page.

No more serials for me, probably. That’s a lot of illustrations. 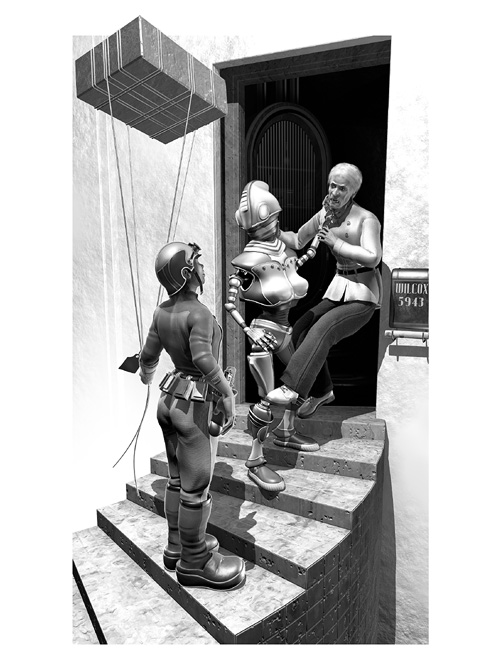 The rest of the work you have to do to have an actual book, rather than all the stuff you need for one, is to launch it.

This time I plan to do that in pretty much the way that any publisher would. So there will be review copies, copies sent to bookstore buyers, and other expenses. And to meet those expenses I hope to enlist you in the launch through a Kickstarter project that will put an ARC (or advance copy) right in your own hands while funding the distribution of a lot more copies to places where they’ll do the book some good. And once you get your own copy – right about the time that the book bloggers and buyers get theirs – I hope that you’ll review it, and post about it, and tell everyone you meet on a street corner about Patently Absurd. Because grass roots promotion is the key.

It’ll be a pretty tight schedule, for me: I want to start the Kickstarter project during the first half of October. So I’ve started the pitch video and the project itself, and there isn’t a heck of a lot of time to get it all done. Believe me, you’ll hear about it when I kick the thing off.

It shouldn’t be long!

This entry was posted on Thursday, September 28th, 2017
and was filed under Patently Absurd, Thrilling Tales of the Downright Unusual, Works in Progress
There have been no responses » 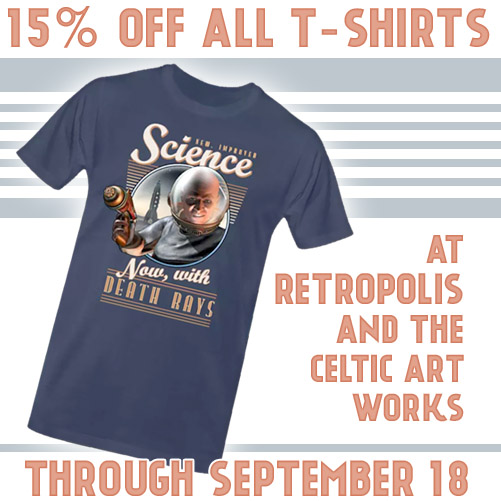 It’s true: now, in this brief moment before you start wishing they were sweaters, you can get a 15% discount on all my t-shirts from Retropolis and The Celtic Art Works.

The sale lasts through Monday, September 18th, and all you need to do is to enter the coupon code 150917 while you check out online. Save 15%!

This entry was posted on Tuesday, September 12th, 2017
and was filed under Works in Progress
There have been no responses » 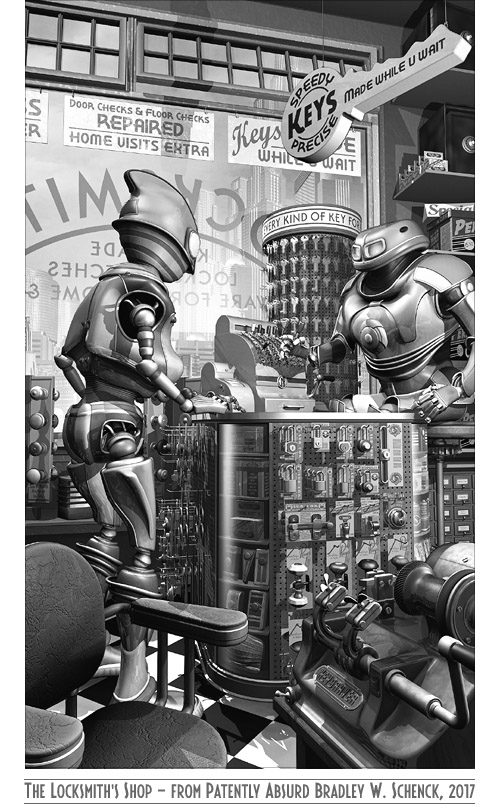 As I said in my last post, I’ve been busy; I still am. I’m working on my tenth illustration for Patently Absurd since the end of June.

It’s not a bad average when you do the arithmetic, but I spent twenty days on the picture we see here. That’s slowed me way down since the beginning (the first five pictures went very quickly) but I knew what I wanted here, and it was obvious that it would take a bit of time.

Sometimes what you need is a little, cluttered shop filled with the things that clutter little shops, and if all those things are unique and new then your next twenty days are pretty well spoken for.

I kind of expected it to take twenty-one days. So if you squint a bit and tilt your head just right, it looks like I’m ahead of schedule.

That’s why I look a little squinty and twitchy just now.

It’s not working, though. When I lose the squint and straighten up my head I can see that I’m far behind where I’d hoped to be by now. So it’s likely that the blog will remain quiet for awhile longer.

I think it was one of Tim Powers’ characters who once said “If it was easy, they’d have got someone else to do it.”

I was pretty happy to see this latecomer of Switchboard reviews at Sci-Fi Fan Letter. Among other things, there’s this:

I loved the characters in this. Dash is so much fun, and Nola’s got a good mix of spunk and intelligence. The Campbell kids are… something. They were both great and terrifying to follow.

The world-building was great. The switchboard is sort of an internet, if history had taken a different path. The priests of the spider god were fun, and kept the old school pulp feel. The robot League and the interactions between robot and human people show a positive future that’s often lacking in modern SF and something I enjoyed seeing.

The book’s done very well over at Goodreads, with forty ratings and twenty-six reviews; at Amazon it has a good, solid rating, but only twelve reviews.

Hint: those Amazon reviews are really helpful at the Amazon site. So if you’ve read Slaves of the Switchboard of Doom, consider adding a review at Amazon. Thanks!

I’ll close with a reminder that you can get an eBook copy of The Lair of the Clockwork Book for $2.99 (a dollar below list price!) at Radio Planet Books.

This entry was posted on Tuesday, September 5th, 2017
and was filed under Patently Absurd, Thrilling Tales of the Downright Unusual, Works in Progress
There have been no responses »