I always thought that I’d be a writer. It was a bit of a shock when, sometime in the middle 1970’s, I realized that I was spending all my time making pictures. For the most part I’ve been doing that ever since.

During the early days of tabletop role-playing games I illustrated magazines, games, and gaming accessories for The Dragon, Alarums & Excursions, Wee Warriors, and Dave Hargrave’s Arduin. Still a teenager, I did all of this work under the pen name Morno. 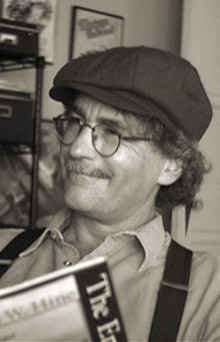 Back in those days there weren’t a heck of a lot of options for artists, so while I drew and painted and even sold my paintings I also did advertising art and designs for businesses, painted signs, did some illustration for publishers and small music labels, and worked for awhile as a draftsman.

Computers started to get awfully interesting in the late 1980s. I began to do freelance work for computer game companies, founded one, foundered it, and moved on to making and directing art at a series of game development houses. Several have been shot out from under me.

I went through a long spell in which was keenly interested in Celtic art – the sort of abstract decorative design that we call “Celtic Knotwork” or “Celtic Interlace”. Both my grandmothers came from Irish-American families, so that’s my excuse.

But more recently I’ve been exploring what I call “The Future That Never Was” – that’s the future that folks who once read too much Flash Gordon or Buck Rogers thought they’d live to see; or maybe it’s the future foreseen by the 1939 New York Worlds Fair.

This seems to have started with my love for the music of the 20’s and 30’s, but grew into an interest in the Depression era, and from that, to the sort of better futures that people in that terrible time hoped to see. Among those visions are things like Dr. Townsend’s Revolving Old Age Pension Plan, or Technocracy.

What touches me about those visions is the universality of them. People hoped not so much for personal prosperity, but rather for a world in which everyone would be better off. A world where breadlines and apple sellers would be replaced by hovercars and autogyros. At a time when 25% of America’s population was unemployed it just wasn’t enough for any one person to do better – the world needed to be remade.

Many of those bits of the future have been invented and achieved, but we do seem to have missed out on that aspect of universality. Not to mention the personal rocket ships, which, personally, I’m still a little peeved about.

Most of that work can be seen at Retropolis (my Celtic art is at The Celtic Art Works). But over time I returned to writing, too, in interactive and serial stories at Thrilling Tales of the Downright Unusual. That led to an illustrated novel, Slaves of the Switchboard of Doom; Switchboard has been acquired by Tor Books for publication in 2017.

My role model used to be Philip Marlowe, but I’ve mellowed with age: now it’s Doc from “Cannery Row”.

You can see highlights from my work history here, or a (likely incomplete) list of my published work here.