The unsung extras from Slaves of the Switchboard of Doom 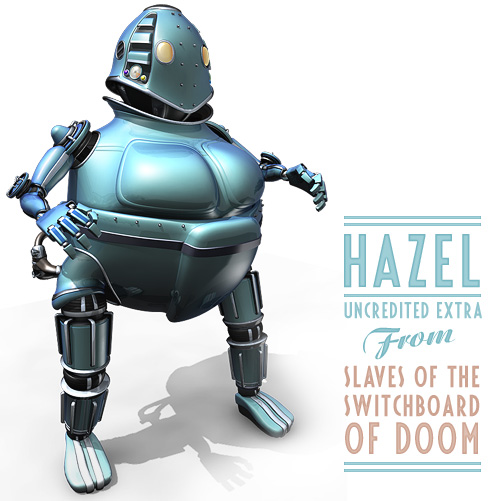 So you’ve seen the Green Room, where my characters while away the hours until their names come up on the call sheet; and really, all the characters get to enjoy its amenities. But so far we’ve only looked at named characters: those human and mechanical people who have lines, or – if they’re not equipped for speech – something like lines.

But that’s not everyone: in Slaves of the Switchboard of Doom there are hundreds of robots from the Fraternal League of Robotic persons; there’s a council room filled with the Priests of the Spider God; there are plenty of switchboard operators who pitch in, but never chime in; and so on. And at last there are those characters who simply mill around in the backgrounds of the illustrations. Like Hazel, here.

Hazel falls into that category of character actors who we see over and over again in the old studio films. She’s individual enough to stand out even though she never gets a line. If she minds at all, she won’t let on. Hazel’s a pro.

Hazel’s especially useful to me because her silhouette is so distinctive. I need a bunch of robots. I’m still modelling them as they’re needed for one chapter or another. In order to give them plenty of personality in such humble roles, I’m trying to create varied body types.

The fact is, though, I’m kind of taken with Hazel here. I may have to give her a bigger role in the future. That’s it, hon: I can make you a star. 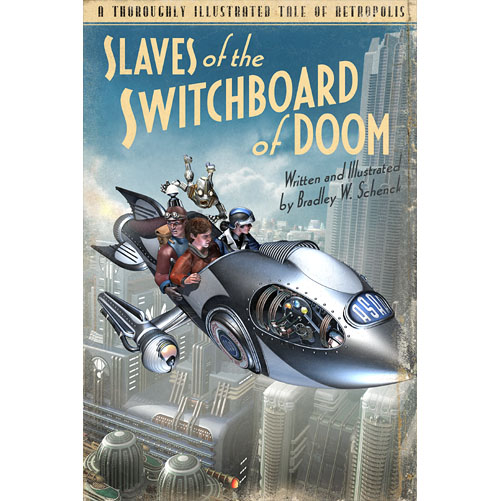 This entry was posted on Tuesday, May 27th, 2014
and was filed under Slaves of the Switchboard of Doom, Thrilling Tales of the Downright Unusual, Works in Progress
There have been no responses » 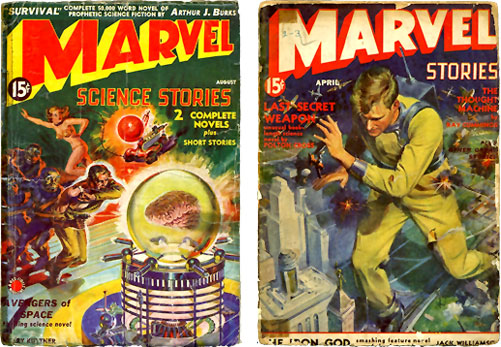 The all-devouring scanner of Mister Doortree treats us, today, to a collection of covers and illustrations from Marvel Science Stories. They’ve come to us from the future by way of the years 1938 to 1941.

The well-rounded stable of artists ranges from Norman Saunders and Frank R. Paul to a young Jack Kirby. Each one of them wants to show you brains in balls, women in tubes, gigantic spacemen (in tiny cities), creepy things, and fellas in swell hats.

The least you can do is to go have a look, eh?

This entry was posted on Thursday, May 22nd, 2014
and was filed under Found on the Web
There have been no responses »

Slaves of the Switchboard of Doom – behind the scenes extra! 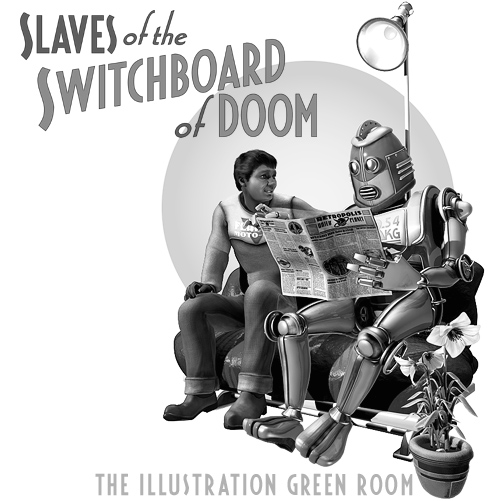 I don’t often show behind-the-scenes images from my work here in the Secret Laboratory. This may be a character defect. I’ve wondered about that before.

But people do get curious; it’s natural enough. So here’s a rare shot from behind the scenes that explains what happens between the time I build and texture a character, and the time that character shows up in an illustration. That may take weeks, or even months, so the Secret Laboratory’s Green Room is as comfortable as I can make it.

In this corner of the Green Room we see R-54KG and Davies. They’re catching up on the latest news until they’re needed for Chapter 18.

The characters in the Green Room amuse themselves in all sorts of ways, many of which require some clean-up and damage control because, well… that’s just how they are. Increasingly, though, they’ve kept their noses buried in their Info-Slates: they just tune out the other characters around them. Now I myself have been accused of being on the introverted side, but this behavior strikes even me as antisocial. So I’m planning to add some board games.

The Green Room’s come a long way since Trapped in the Tower of the Brain Thieves. Back then, there wasn’t even a Craft Service table. Hard to believe!

This entry was posted on Friday, May 16th, 2014
and was filed under Slaves of the Switchboard of Doom, Thrilling Tales of the Downright Unusual, Works in Progress
There have been 2 Responses »

Swedish movie posters at io9, brain resets, and injustice on the Satellite of Love 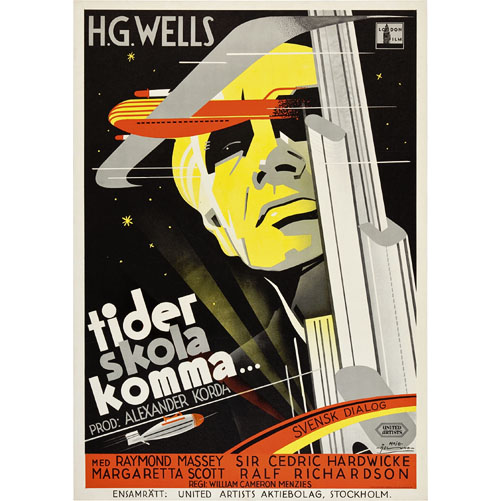 Here’s a Swedish movie poster for Alexander Korda’s Things to Come, just one of a series posted over at io9. Lovely design.

The last time I watched the film I saw Raymond Massey’s character as a sinister figure, certain that he knew what was best, dammit, and you’d take it – and like it! – which wasn’t really what the film was trying to show me. It’s always interesting how our perceptions change over time, especially when we’re watching or reading things from decades past. I noticed this again last night: I had to reset my brain during the first few pages of Barnes’ Interplanetary Huntress, mentioned earlier (and still a free download!

Eventually my brain stopped commenting “Well, this wouldn’t play too well today” and I was able to enjoy the peculiar Venusian wildlife in the story. There were these armored beetles that liked pipe smoke, for example.

But this morning, and these posters, reminded me of what has aways seemed like an injustice in Mystery Science Theater 3000. Joel and/or Mike and the bots skewered several Swedish fantasy films that had been dubbed (badly) for an American audience. One was even turned into a “Sinbad” story. It was that bad. But it always seemed to me that in their original versions these may have been pretty cool movies. I guess we’ll never know.

This entry was posted on Tuesday, May 13th, 2014
and was filed under Found on the Web
There have been no responses »