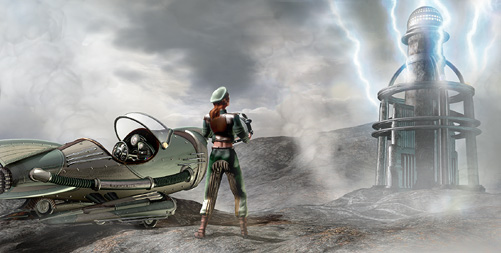 Just an illustration I think I’ve finally finished, from that second project I kept alluding to down below. This one, as simple and small as it seems, has shown me neither mercy nor quarter. If there’s a difference.

Though it means nothing to you, we have here Gwen Hopkins in front of the Icelandic tower of mad Doctor Rognvald. She’s about to deliver his… toaster. Honest. I wouldn’t make that up.

Okay, in point of fact I did make that up, but I didn’t make up the fact that I made it up. Previously. In good faith.

This entry was posted on Saturday, August 29th, 2009
and was filed under Thrilling Tales of the Downright Unusual, Works in Progress
There have been no responses » 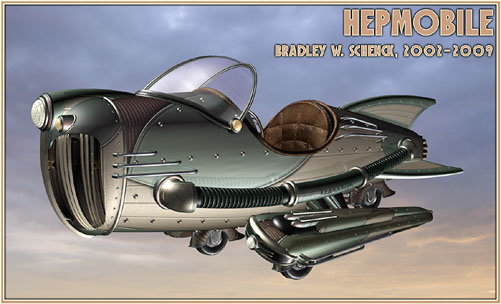 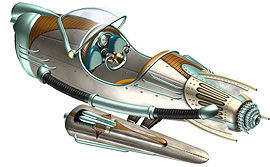 Raygun Gothic Rocketship counts down to its launch

As I write, the countdown timer on its web site tells me that less than 13 days remain till the arrival of the Raygun Gothic Rocketship at its destination, which is either Burning Man or someplace a bit more interstellar.

If you’ve missed it, this is an impressive feat of construction – at forty feet tall! – by the same group of demented designers that brought us the Steampunk Treehouse.

Much as I like treehouses, this one’s probably a little nearer the mark for me.

They describe it in this way:

The Raygun Gothic Rocketship is intended to creatively explore our ideas about evolution and technology as they relate to our notions about progress and The Future. This project exists at the blurry edge where science and fiction blend and become both our reality, and the stories we tell ourselves about that reality.

For those of us who haven’t been to art school, my Disingenuizing Deconstructor translates that as:

We though this would be so cool to make! But we’re afraid that you won’t respect us unless we come up with some sort of ridiculous prevarication that makes us sound all… sort of intellectual, you know?

But disregard the pretensions. It is a richer world that has scenes in it like the one below.

A little Lewis Wickes Hine, a little Buck Rogers. Just the way I like it.

And with this post I’ve caught up a bit with the cool things that have been piling up while I worked away almost tirelessly in the Secret Laboratory: in the past three days I’ve written posts about robots, ray guns, and rocket ships. It’s the trifecta of retro futurism!

This entry was posted on Saturday, August 22nd, 2009
and was filed under Found on the Web
There have been no responses »

Steven Melendez is another visitor to the Retropolis Transit Authority who sent me a link to this cool video of the raygun he built recently. Neat!

He says he built it "…incorporating scratch building, laser engraving, and conventional machining with a mill and lathe. It has an auto enamel copper and silver finish with patina."

And it is indeed sweet.

As far as me updates go, I have at least mailed off a mysterious packet for one of those two super secret things I’m doing, though odds are I’ll need to do something else before the whole shebang is ready for its pitch. Back to super secret thing #2, I guess. More anon.

This entry was posted on Friday, August 21st, 2009
and was filed under Found on the Web
There have been 4 Responses »

I’m still stapled to my desk, but cool things keep flying out of my monitor at me even though I’m doing my best to ignore them. I’m just that dedicated.

But I’m going to try to catch up a bit before the cool things pile up and spill into my coffee cup. So here’s one:

Retropolis Transit Authority customer Tim Hammell sends me this link to some wonderful retro robots built out of found objects from thrift stores and, for all I know, time traveling midden heaps – they’re by Lipson Robotics, and I envy Tim because he’s the happy owner of one of them.

The sculptures are assembled completely with nuts and bolts, which seem so much more fitting than adhesives. It’s as though they’re who they are, through and through, and I like that about them. Come to think of it, I like that about anybody.

Lipson Robotics is the brainchild of an animation director and producer with years of experience on stuff you’ve probably seen. But I prefer to think that his true calling is scavenging for robot parts, and putting them together. It’s destiny.

This entry was posted on Thursday, August 20th, 2009
and was filed under Found on the Web
There has been 1 Response »

Where the heck have I been? Plus ‘The Mercury Men’, an online movie serial

I just realized that August is half over, and I’ve yet to post anything at all for the month. There are terrific reasons for that; I’ve been working very hard on two Really Interesting Things that I can’t discuss for now.

Honestly, I’ve hardly looked up. Like I said, Really Interesting.

So in the meantime, here’s something I stumbled over which is also Really Interesting, not to mention Really Spiffy. It’s the trailer for an online retro movie serial called The Mercury Men.

Enjoy the trailer, and then pop over to the web site. Subscribe. Have some popcorn. Enjoy.

I’ll be back before long.

This entry was posted on Sunday, August 16th, 2009
and was filed under Found on the Web
There have been 2 Responses »