Vika’s Avenger, with my illustrations, is now available in the wild. If by “the wild” we mean Amazon. 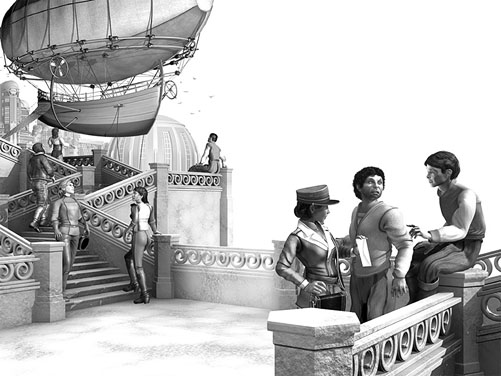 The Kickstarter-funded paperback, clothbound and eBook editions of Lawrence Watt-Evans’ Vika’s Avenger are now working their way out to the project’s backers. All three print editions of the book feature my six illustrations; Kickstarter backers who chose 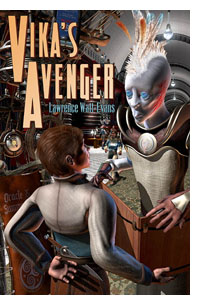 the eBook editions are getting a PDF that includes the illustrations, since the digital editions don’t have them.

For the rest of us, the paperback edition (with the illustrations and color cover) is also now available on Amazon.

This was a fun project for me. It’s the kind of space fantasy adventure I used to devour wholesale when I was a teenager, full of airships, rogue scientists, and an ancient planet that’s been up and down the technological ladder so many times that people don’t have a clear idea any more what’s science and what’s magic: in fact the terms are pretty much interchangeable.

So you’ve got sunken towers with lights that never go out, and peculiar people who may not always have been people, and warring factions and Guilds, many of which practice one form of tek or another. And, you know, revenge. Because some things just don’t change.

This entry was posted on Thursday, October 10th, 2013
and was filed under Thrilling Tales of the Downright Unusual, Works in Progress
There have been 3 Responses »