Hot off the morning’s airship delivery, a series of t-shirts, long sleeved tees, and baseball jerseys featuring a promotional logo for the Retropolis Transit Authority.

Here the propeller-steered airship of the Future That Never Was rides over the Transit logo, which is oddly reminiscent of the “London Underground” logo – mainly because I was being oddly reminiscent about that, at the time.

And below that, the timeless commuter’s motto of “If You Lived Here, You’d Be Home Now”. I actually saw that on billboards when I was in my teens and couldn’t for the life of me figure out what it was getting at until years later, stuck in the Los Angeles traffic on my way home, it all sort of clicked and finally made sense to me in that special “Thank you, Captain Obvious!” sort of way.

This entry was posted on Thursday, September 25th, 2008
and was filed under Works in Progress
There has been 1 Response »

Thrilling Tales: The Tune Up of Terror

Change the oil, test the tubes, adjust the positronic circuits… but DON’T, please, use those jumper cables or strap me down to the… wait! Help!

This dramatic re-enactment of a senseless, preventable crime is meant to remind you how very important it is – even in emergencies – to make certain that any Sanity-Challenged Technophile you consult is fully vetted by the Retropolis Board of Technological Sociopaths. Check their certificates! Get a recommendation!

As with the rest of this series, TUNE UP OF TERROR is available on shirts, posters, greeting cards , coffee mugs, and on blank books.

Because this message is SO IMPORTANT to the Robotic Friendship Devices in your life, and mine.

This entry was posted on Friday, September 19th, 2008
and was filed under Thrilling Tales of the Downright Unusual, Works in Progress
There have been no responses »

Yes! In Fact, This IS Rocket Science 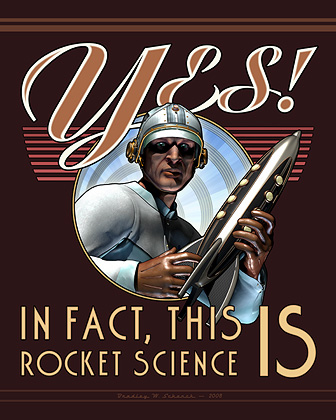 Whether you’re a propeller head or not; whether you’re a valued research scientist, an engineer, or a mad genius; or even if you’re none of the above – what you do may be, in fact, rocket science. No matter what they say.

Life’s just full of things that aren’t rocket science. Ask anyone. So how to gracefully explain to all and sundry that what you do IS, in fact, rocket science? We’re here to help.

As usual, available as a poster, greeting card, coffee mug, and on T-shirts.

This entry was posted on Monday, September 1st, 2008
and was filed under Works in Progress
There have been no responses »