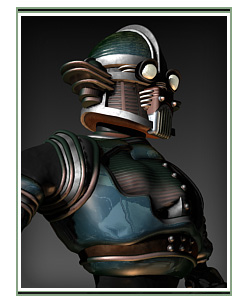 I’m finishing up a new robot character that I’m calling the “Myrmidon” – which, depending on your preference, makes him either an ant or an Homeric warrior. Actually I don’t think either of those is quite right, so we may need to add another definition.

At this point I’ve rendered out a turntable animation to make it easier to find the last little tweaks I want to make, after which I need to set him up with a skeleton and skin him. It. Whatever.

END_OF_DOCUMENT_TOKEN_TO_BE_REPLACED

This entry was posted on Wednesday, November 26th, 2008
and was filed under Computer Graphics, Works in Progress
There have been no responses »

No! This is NOT Rocket Science 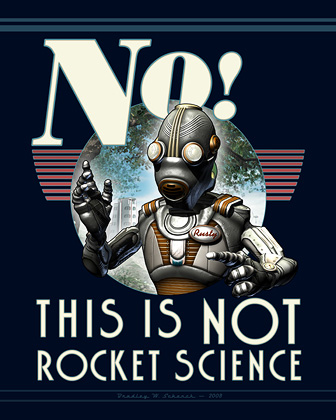 This is a natural counterpoint to my “This IS Rocket Science” T-Shirt design (both are available at the Retropolis Transit Authority) – and, taken together, they’re a handy way to make it absolutely clear to anyone which things are, and which are not. Or, if for instance the poster versions are hung in the same room, they can make many people sort of short circuit and start drooling. Which is also pretty interesting to watch.

As always, or at least as, well, often, this one’s also available on mugs, greeting cards, and blank books.

This entry was posted on Thursday, November 20th, 2008
and was filed under Works in Progress
There has been 1 Response »

Ferriss Moto-Man: the Retro Robot You Didn’t Know You Needed 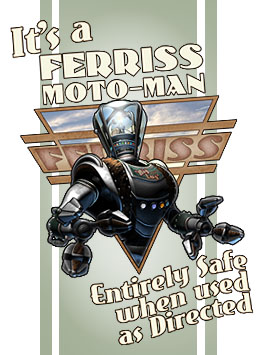 Let me just dust things off here for a moment… yep, that’s dust. I’ll put it… there.

I know it’s been quiet in here lately, and that’s not completely my own idea, honest. But in spite of everything I’ve just finished a new design for t-shirts, blank books, a poster, greeting cards, and whatnot. Whatnot = mugs and stuff.

This is a Retropolitan advertisement for the Mark II version of Ferriss Moto-Man’s Big Lug robot. He’s a handsome and very durable heavy-duty robot who’s perfect for any task you’ve got, provided that task doesn’t need more brainpower than you’d find in your average Pomeranian. He’s big and he’s useful, but he’s not the brightest bulb on the chain, if you know what I mean. But cheer up – he’s Entirely Safe When Used As Directed. Like me, that is, and probably like you too.

This entry was posted on Monday, November 17th, 2008
and was filed under Works in Progress
There have been no responses »