Thrilling Tales of the Downright Unusual at Kickstarter – Last Call!

The Kickstarter promotion for Thrilling Tales of the Downright Unusual is down to its final hours! The good news is that we’ve reached the funding goal – so the pledges will be redeemed, the Fabulous Prizes will ship out to the project’s backers, and people, by which I mean me, will be dancing in the streets.

The rest of the news isn’t bad. It’s all good. Really!

But as I explained in the project description I set a funding goal that I believed we could reach.

The actual expense of producing the next chapter of The Toaster With Two Brains and the non-interactive Clockwork Book stories will be quite a bit more than that. I’ll be making up the difference myself, of course, but as far as the Kickstarter project goes… well, the more the merrier.

So if you’ve been thinking about pledging to support the project in return for books, prints, exclusive t-shirts and so on, well, this is your last chance to pile on.

This entry was posted on Thursday, July 15th, 2010
and was filed under Thrilling Tales of the Downright Unusual, Works in Progress
There have been 3 Responses » 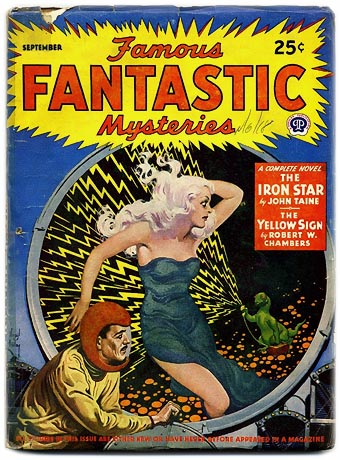 Famous Fantastic Mysteries ran from 1939 to 1953. I have a particular soft spot for this magazine because it was the original home of so many stories by H. Rider Haggard, Talbot Mundy, A. Merritt and others which I read in reprints when I was a tadpole. It’s now struck me that the logo from the later issues looks like a parent to the title plate for Fantastic Stories, in which I read new fiction in those same tadpole days.

You just can’t go wrong with titles like Radio Planet and the Ant Men.

This entry was posted on Wednesday, July 14th, 2010
and was filed under Found on the Web
There have been no responses »

Cthulhu Sez, “Buy These Celtic Art T-Shirts for $8 Each!”

Over at my Saga Shirts site, I’ve got some leftover inventory that I’d like to clear out: they’re high quality, silk screened Celtic knotwork designs on black American Apparel shirts in men’s and women’s styles.

Because they’re the remnants of their print runs, they’re not available in all sizes.

I’ve had them marked down for awhile. But now you can pick them up for the low, low price of $8 each if you use the coupon code CTHULHU during checkout.

So hop on over to the R’lyeh showroom and snap up the Celtic Skull and Crossbones, Celtic Art Cats, Celtic Biohazard Symbol, or Pentacle & Ankh t-shirts… while they last!

This entry was posted on Sunday, July 11th, 2010
and was filed under Works in Progress
There have been 4 Responses »

MIT Uses Invisible Rays to Transform Your Hand Into a Mouse

Okay, that headline might be a little misleading, even though it’s more or less accurate. Because at MIT’s Media Lab, Pranav Mistry has developed a system that uses a small laser and an infrared camera to track your hand movements as though your hand was a computer mouse, and your first two fingers were that mouse’s left and right buttons.

According to Gajitz the hardware cost about $20. Because that’s an end user’s price you can figure that a manufacturer would be able to install the system for even less – enough less, for example, to include the system on the left and right sides of a laptop so that both right handed and left handed users could mouse away, right out of the box.

And because the software interprets the movement of the user’s fingers any number of gestures could be supported. Your desktop could become a multitouch surface that you could use without leaving fingerprints all over your display (I’m looking at you, iPad).

Cartoon mice are a free bonus!

This entry was posted on Monday, July 5th, 2010
and was filed under Found on the Web
There have been 3 Responses »