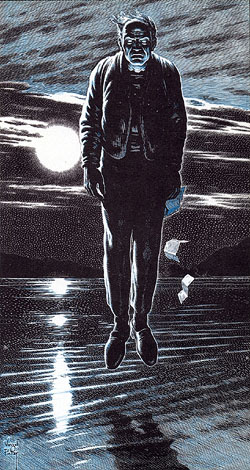 Here’s an unexpected mini-history of science fiction illustration from the early sixties to the mid eighties: a selection of brochure illustrations for Things to Come, the newsletter and monthly catalogue of the Science Fiction Book Club. The scanned images are available over at The Golden Age.

I called it unexpected, but it’s one of those things that just makes all kinds of sense now that I’ve seen it. The Science Fiction Book Club printed inexpensive hardcover editions of popular and once-popular books with new cover art and sometimes with illustrations. I particularly remember the Mars series by Edgar Rice Burroughs with illustrations by Frank Frazetta. Their monthly newsletters always featured cover art and spot illustrations.

Several of these brochures came through my own mail slot in the early seventies. Book clubs were fraught with tension and excitement: if you forgot to send back the card that opted you out of this month’s top selection (“Man-Eating Orchids of the Stratosphere”, anyone?) then you’d receive the book automatically. This was a business model that probably worked very well.

It’s never occurred to me what a wonderful time capsule these brochure illustrations would make. We’ve got everything here from Virgil Finlay (shown here) through Freas and Frazetta to Richard Corben, George Barr, Michael William Kaluta, Don Maitz, and Michael Whelan.

I still have some of those books, like Philip K. Dick’s Ubik, Zelazny’s Jack of Shadows, and a couple of the Burroughs books. The brochures? Well, no. But thanks to the unflagging scanner of Mister Doortree at the Golden Age blog I can page through the illustrations anyway. And so can you! 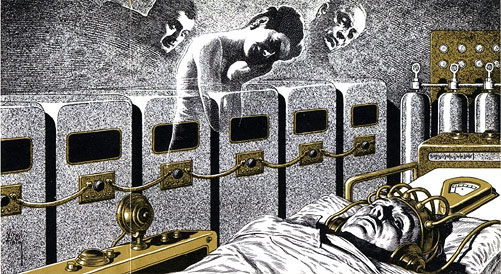 This entry was posted on Wednesday, November 26th, 2014
and was filed under Found on the Web
There have been no responses »

Back in the late 1980s one of the most exciting game developers for the Amiga was Cinemaware. They carved out a unique, special niche with a combination of action sequences, storytelling, and puzzles in a series of games that were each based on some kind of movie making from the golden, silver, and (mainly) brazen eras of film.

With titles like Defender of the Crown, The Three Stooges, It Came from the Desert! and Rocket Ranger, Cinemaware had a speedy rise that was eventually followed by a speedy fall. But in between, with ports of their games to all the popular computers of the day, they earned a place in the memories of game players of A Certain Age.

These games have been given new life through remakes, reboots, and reimaginings, largely due to Kickstarter. As a follow-up to last year’s successful remastered edition of Wings, the company is now trying to gain support for this completely rebuilt, expanded edition of Rocket Ranger – the popular “I’m not the Rocketeer!” game that was itself a reimagining of the old serial adventures of the 1940s and 1950s.

The new Rocket Ranger Reloaded pits the same kind of rocket pack hero against the same kind of inevitable Nazis. It’s a brand new version of the original idea, with its dogfights, gun battles, boxing, and rocket research; but in its reloaded form the game will sport completely new graphics, new locations and scenarios, an original soundtrack, and even more retro futuristic gear.

At the basic funding goal of $89,999 there will be versions for Windows and Mac computers. The various stretch goals for the project add support for Android, iOS, PS4, Xbox One and PS Vita.

Digital copies of the game are available for pledges of $19 or more; physical copies start at $55. The project concludes on December 17 and rewards are scheduled for September 15, 2015.

This entry was posted on Monday, November 24th, 2014
and was filed under Found on the Web
There have been no responses »

This beautiful ray gun – a contest entry – turned up in my Facebook feed a few days ago, and that led me to the Facebook page and the web site for Resinator Lab.

Resinator Lab, with its battered worktables and laser-scarred parts bins, is lit by vacuum tubes that flicker in a very nearly non-threatening way; it’s the workplace of Rolando Gutierrez, and it’s also the place where you’ll find these fantastic ray guns from the future we never got. If we ever do get that future, of course, you’ll want to have something like these in your holster. Because of those things with an unlikely number of arms, out there in the alley.

At the Resinator Lab web site you’ll find fine examples of retro futuristic weaponry. Some are available fully assembled and painted, while others can be had as kits. You can see the Atomizer Laser kit below.

The site’s gallery page shows some beauty shots of guns built by Gutierrez himself, and some by others.

But it’s hard to beat that contest gun up at the top. What a beauty! 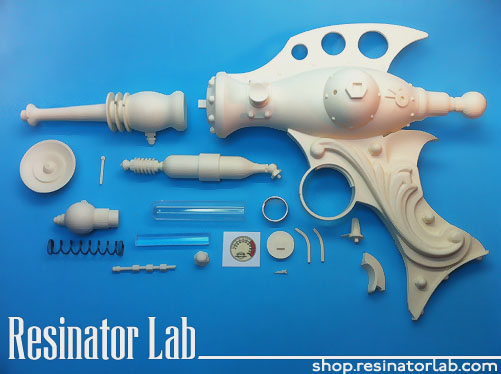 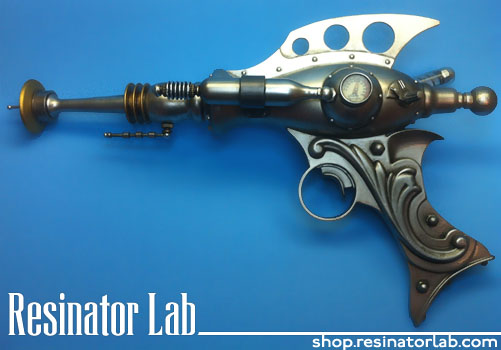 This entry was posted on Tuesday, November 11th, 2014
and was filed under Found on the Web
There has been 1 Response »

Extra Innings for Slaves of the Switchboard of Doom 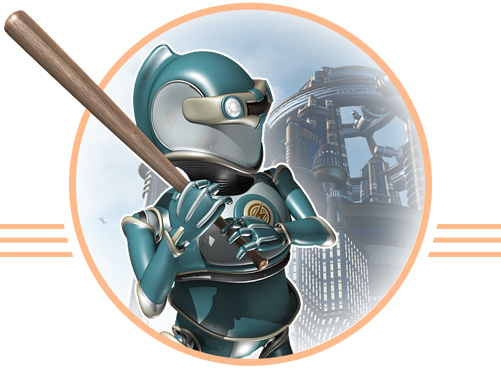 A couple of days ago I finished the last of my planned revisions to the illustrations for Slaves of the Switchboard of Doom. That last one was an all new replacement for my Chapter 17 illustration; I never felt quite right about the old one, and the new one’s much nicer.

And I thought that would be the end. But in spite of myself I keep on tinkering with the Chapter 1 illustration: I’m not sure whether I’m revising it or replacing it. So far I’m banking on "revising", but I may be wrong. That happens all the time.

It’s all tantalizingly close, anyway: twenty-one illustrations for the chapters, a title page, and two pseudoendpapers. It’s a big set by most standards, though a small one by the standards I set over at Thrilling Tales of the Downright Unusual. In that case… I plead insanity, if you’re asking.

In related news, very neat but gradual things are happening and – once they’ve stopped happening – I look forward to letting you know what’s up.

This entry was posted on Sunday, November 2nd, 2014
and was filed under Slaves of the Switchboard of Doom, Thrilling Tales of the Downright Unusual, Works in Progress
There have been no responses »