Thrilling Tales: The Monument of Mystery 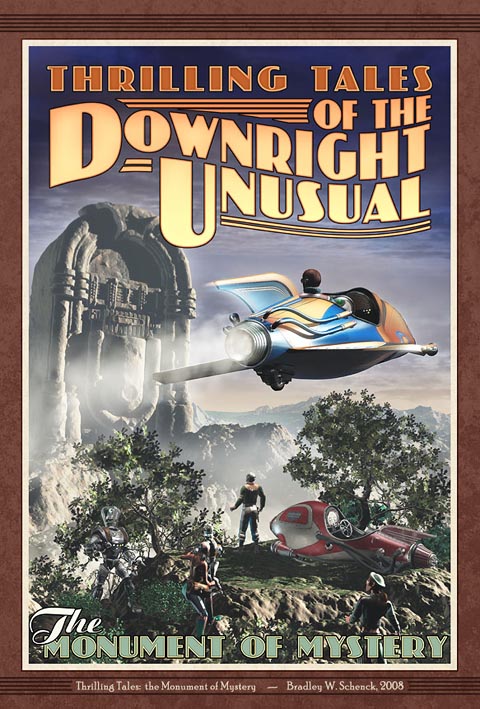 Explorers on the Earthlike planet Wurlitzer 1015 are dumbfounded when they discover an ancient, mysterious monument brooding over its hills. What can it mean? Where can it have come from?

This retro science fiction pulp style illustration is an object lesson that shows us how little we really know of the worlds – or of the jukeboxes – that crowd the universe. The archaeological dig is still in progress; but there’s no doubt that these platter spinning aliens were here long before we were. And where are they now? Only the cryptic message “8 TRAK RULZ” may point the way.

Okay, sorry, I made that part up.

Yep, it’s another fake sci fi pulp magazine cover, and like the others, I’ve splattered it across T-Shirts, a poster, an archival print, blank books, greeting cards and, well, anything else that wasn’t moving too fast for me. And I’ve gotta say, I’m still sort of spry. Ish.

This entry was posted on Wednesday, August 27th, 2008
and was filed under Thrilling Tales of the Downright Unusual, Works in Progress
There have been no responses » 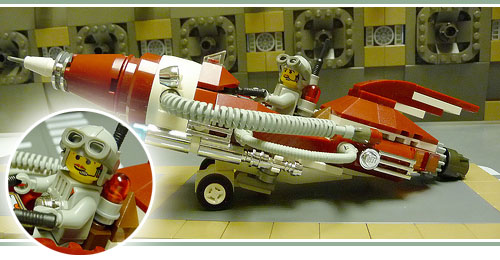 Chris Giddens writes to share with me his astonishing Lego retro rocket, complete with pilot-adventurer, which he tells me was inspired by my Retropolis pictures. I can’t help but wonder whether it takes him longer to build one than it takes me to model it :). Whillikers!

There are three photos of the little roadster rocket in his Flickr stream (here, here, and here) and those pictures share tags with some other pretty neat stuff I might otherwise have missed.

This entry was posted on Monday, August 18th, 2008
and was filed under Hodgepodge
There have been no responses » 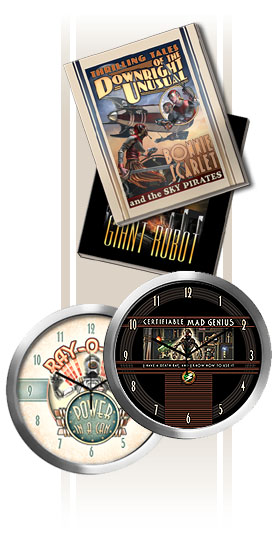 I guess I really wanted my imaginary magazine “Thrilling Tales of the Downright Unusual” to be in print, one way or another, so since I couldn’t do that exact thing I got wrapped up in designing a series of blank books with that and other retro science fiction art from my Retropolis series.

What came out of that convoluted sentence is this collection of blank books with both lined (or ruled) pages, and with unlined pages.

While I was at it, I put together a new series of clocks. I’ve offered a few small clocks for sale before but these new ones are another matter entirely – 14″ in diameter, with glass lenses and awesomely retrofuturistic aluminum rims. Neat!

This entry was posted on Saturday, August 16th, 2008
and was filed under Works in Progress
There have been no responses » 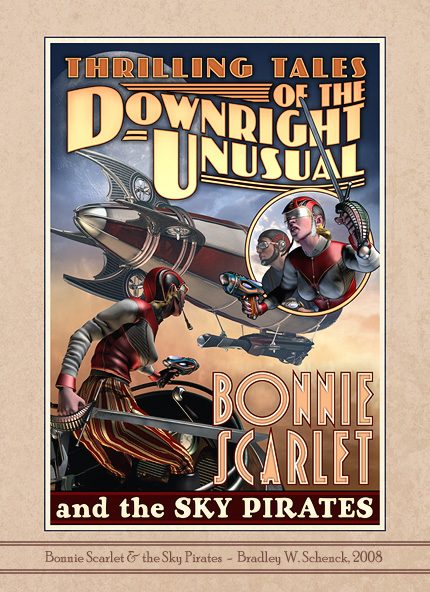 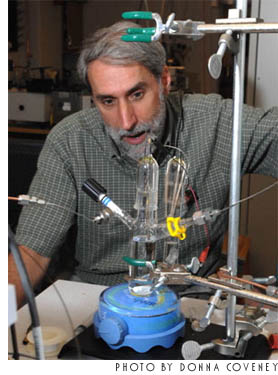 Back in May of 1935, Charles F. Kettering of General Motors told Modern Mechanix & Inventions magazine that if we could only unlock the secrets of photosynthesis and harness them, we’d have found the way to create almost limitless, inexpensive energy.

Researchers at MIT seem to have cracked that nut in a way they hope will turn each of our homes into its own power station – and filling station – with a process that can cheaply and effectively store electricity from solar (or other) sources using common carbon-free materials at room temperature.

Storing and transmitting energy is a lot more difficult than you’d suppose. There are inevitable losses as energy passes through power lines. That’s why the extensive wind farms being built these days provide regional, not national, power. In fact, about a gazillion years ago when I worked at the Diablo Canyon nuclear power plant on California’s central coast, that plant was linked to an underground hydroelectric plant. In off hours the nuclear plant’s energy was used to pump the subterrainean reservoir uphill so that in peak times the water could rush downhill and power turbines that supplemented the nuclear plant’s output. Very clever, really, but there were still substantial losses in energy because of friction.

And storing solar power for later use at night is one of the problems that continue to face the solar power industry.

This new process developed at MIT – due in part to the funding of a ten million dollar grant from the Chesonis Foundation – is a very simple technique that uses electrical current to separate oxygen and hydrogen in gaseous form, later to be recombined to produce power or charge fuel cells. The result could be the near complete decentralization of power. Each home would become its own solar power plant and filling station for the fuel cells we’ll need to power our electric cars. It’s the sort of energy system you’d expect to need in outer space – but you’d be using it at home.

In practice, I’d expect that homes would remain on the grid but that demand from the central power stations would drop tremendously as these homes began to generate their own power. In fact the excess power could even be sold back to the utilities. This process is intended to make solar power more effective but it only requires an electrical current to work – so it could be used with any electric sources, including wind farms, which also have a greater or lesser output depending on the conditions outside.

And couldn’t this same process be used in a centralized way to produce the still-expensive hydrogen fuel cells that remain a barrier to fully electric cars?

This entry was posted on Tuesday, August 5th, 2008
and was filed under Can't Stop Thinking, Found on the Web
There have been no responses »