I’ve had an account at DeviantArt for years now – that’s where my Retropolis archival prints come from – and though I don’t get very active on any of the social networking sites, I’ve always enjoyed the opportunity to stumble over really neat art that I’d otherwise never have seen.

So as I was doing test renderings this morning I just browsed through the artwork that I’ve faved there over the years, and I figured I’d share some of it with you.

END_OF_DOCUMENT_TOKEN_TO_BE_REPLACED

This entry was posted on Friday, October 23rd, 2009
and was filed under Found on the Web
There have been no responses »

Apparently, This is My Mission

This entry was posted on Thursday, October 22nd, 2009
and was filed under Found on the Web
There have been no responses » 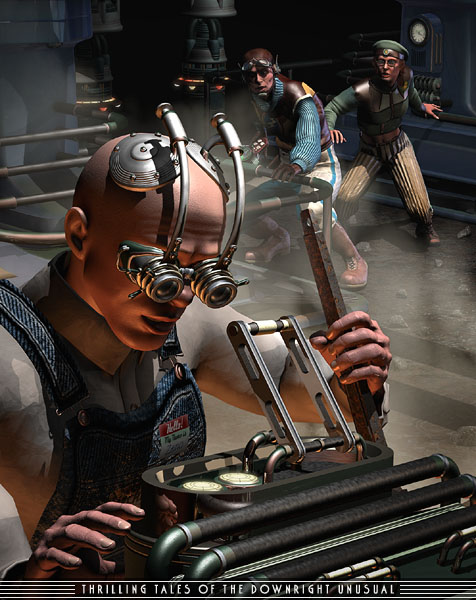 I’m now at forty illustrations for my first Thrilling Tales project – which puts me more or less halfway done. There are still three or four pictures that I’ll be revisiting, but heck, I’ll take my milestones as I find ’em. No matter how long the setup for a set of pictures takes, I still seem to average 1.25 days per illustration. This is a constant source of wonder for me.

Along the way I’ve been tinkering with a random pulp sci fi title generator – also for the Thrilling Tales site – which has really gelled now. It was an interesting problem that involved getting the right flavor for the titles while also creating variety in the sentence structure and coming up with a pretty extensive vocabulary. I’ve been trying to make sure that the titles almost always make grammatical sense without restricting their logical sense. There’s a kind of magic that happens with unexpected combinations. The more you restrict the potential nonsense, the more you lose of the unexpected wonders.

Anyway that’s a diversion, but in fact it’s meant to be a diversion: one of a series of little playthings to flesh out the content for the site. I want to do more of those…. but many of the ideas I have would be best done in Flash, and I don’t want to take the time to learn Flash at the moment, since it’s the stories that are the main event.

This entry was posted on Tuesday, October 20th, 2009
and was filed under Thrilling Tales of the Downright Unusual, Works in Progress
There have been 2 Responses »

A Gallery of Vintage Space Toy Box Art from LIFE 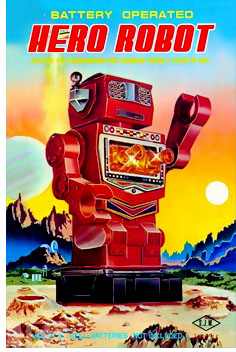 The Life Magazine web site is displaying a gallery of box art from vintage space toys – lots of robots, of course, but there are all the other accessories that amateur spacemen needed back in the day: ray guns, rockets, radios, and even holsters. ‘Cause, you know, our motto was "be prepared". I think that was us, anyway.

They’re including links to buy prints of the images from Getty Images, but those links didn’t want to work for me. Your mileage may vary.

And for more in-depth and nonstop coverage of this sort of thing, I remind you to visit Doc Atomic’s Attic of Astounding Artifacts.

I found the Life gallery via i09, to whom my robotic minions and I offer our humble thanks.

This entry was posted on Tuesday, October 13th, 2009
and was filed under Found on the Web
There have been no responses »

Hey! You got some Film Noir in my Retro Future! 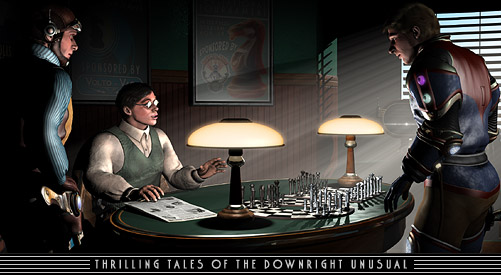 Another week, another set of illustrations for the first story at Thrilling Tales of the Downright Unusual. This week I’ve started working on a different branch of the story (which is Part One of The Toaster with TWO BRAINS!) – because the format for Thrilling Tales is designed for (mildly) interactive, illustrated stories. In the course of illustrating these stories, I get to explore how different characters experience the same events, or events that are linked to those events in the other interactive branches.

That’s one way of looking at it. The other one is "Cripes! How many illustrations does this thing need, anyway?!"

A question that we very nearly explored last week.

But I digress. This branch of the story becomes something like a detective story: a crime’s been committed, and a couple of our heroes spend the day investigating it. It’s a puzzler, and no mistake. What’s fun about this for me is that because our future here is based on the 1920s and 1930s, the dialogue and the situation are flavored with a little Raymond Chandler and Dashiell Hammett. (If I could conjure up a weird stew of writers’ brains, these stories would be looking for a recipe that included Damon Runyon, Dashiell Hammett, Ring Lardner and Terry Pratchett.)

So without banging the viewer over the head with it (I hope!) I’ve used lighting here that’s a clear callback to film noir – the strong light and dark areas, and the Venetian blnds with their shadows and dusty beams of light. It’s pretty fun, or at least it was for me. It’d be easy to drive that over the top, but I hope I haven’t.

Anyway, I’ve wrapped up the scene that takes place in this office and in the coming week I’ll be building something else – someplace we’ll actually see just before this.

This entry was posted on Sunday, October 11th, 2009
and was filed under Thrilling Tales of the Downright Unusual, Works in Progress
There have been no responses » 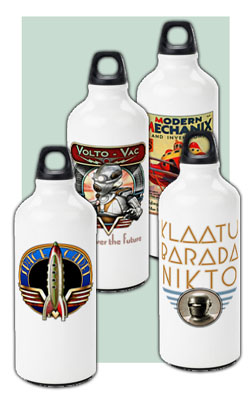 Hey! Just in time for you to equip yourself for that trip across the plains of Barsoom or the deserts of Arrakis, I’ve added a collection of aluminum water bottles to my t-shirt shop, the Retropolis Transit Authority.

I never grokked that whole cultural upheaval that started us carrying plastic water bottles with us everywhere. You use them once, and then neo-Bronze Age farmers will be turning them up with their plows for thousands of years, wondering what the heck we were thinking. With good reason.

So I’m glad to see the addition of reusable, durable water bottles like these that’ll stop us from getting embarrassed when our descendants revive our frozen heads. And I’m happy to slap the slogans, memes and designs of my retro future all over them to tempt you into shoveling shekels my way, too.

This entry was posted on Friday, October 9th, 2009
and was filed under Works in Progress
There have been no responses »

Quantum Universe Bifurcation for your iPhone 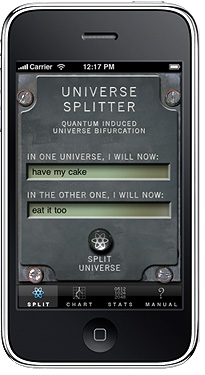 Now you – yes, you! – can turn your iPhone into a Quantum Universe Splitter, enabling you to branch into alternate universes whenever you’re faced with a problem that has two possible solutions. Chocolate, or vanilla? World Peace, or World Domination? Fritters, or bagels?

Because as they tell us, every one of these choices splits off a branching alternate reality, right? So here you go. Just what Walter Bishop on Fringe wishes he’d invented, except that he, like your humble correspondent, seems like a landline kind of guy. This App does not run on a 1947 Stromberg-Carlson, or I’d have one myself.

As you may learn on its web site, the Universe Splitter App connects directly to a quantum random number generator in a Geneva laboratory – which helpfully tells you which of the two possible universes you are in and – therefore – decides which of the two courses you’re meant to take. Don’t take the other one, or it’ll be raining frog-flavored ice cream in Peru on Thursday. Flight 815 will crash again. And more. Just don’t go there, okay?

This helpful App is the brainchild of my old friend Eric Daniels, animator and Quantum Bifurcator. And it’s only $1.99, which on the bell curve of Quantum Mechanics devices is, you know, subatomic.

This entry was posted on Wednesday, October 7th, 2009
and was filed under Found on the Web
There have been no responses »

The latest illustration from Thrilling Tales of the Downright Unusual 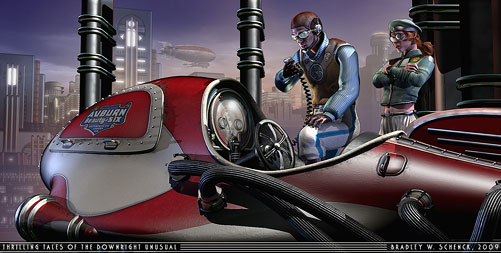 So here’s another illustration from my Thrilling Tales of the Downright Unusual project. It’s a good example of a bad thing I’ve been doing.

It’s been years since I’ve had to pump out work on a difficult schedule – well, except for smaller projects, anyway – and I keep running up against that eternal problem: the picture wants to be as good as possible, but it has to get done today. Or tomorrow, anyway.

So what I keep finding myself doing is fooling myself into believing that an illustration is good, or at least good enough, and that I should wrap it and move on to the next one. Then, after a day or a week, I know that I was wrong about that, and I end up doing it over again. Like I said, this one’s an example.

It’s usually the lighting that suffers the most, since especially in the more complex scenes just rendering out the slightly different previews can take awhile. As those minutes add up, my its-done-o-meter begins to malfunction.

On the other hand, I’ve got over thirty of these done now and there are only a few (remaining) that I think I’ll be reworking. So that’s progress, anyway. When I wrote the script for this story I created a number of story nodes that share the same illustrations – but I didn’t total those up as I went, so at this point I don’t even know how many illustrations I need to make. I could tally them up now – but what a waste of time! It’s less than 105, anyway – probably around 80. Which would make me over a third done.


Update: the Thrilling Tales of the Downright Unusual web site is now alive (alive, I tell you!) at thrilling-tales.webomator.com

This entry was posted on Sunday, October 4th, 2009
and was filed under Thrilling Tales of the Downright Unusual, Works in Progress
There have been 2 Responses »

The Curious Circumstance of the Rocket that Devolved in the Night

The unshaven, rum-addled crew* over at TOR Books’ web site has declared that October shall be a month of Steampunk. And so shall it be, inasmuch as anything having to do with tor.com is concerned, anyway.

But that as interesting as that may be, it’s not what I enjoyed most today at their site.

In order to celebrate the Month of Steampunk they restyled their already retro rocket logo to suit – and then posted an article showing the concepts and describing their process of narrowing down from way too many neat ideas to the one neat idea they really needed. I had a great time wandering through that process even though "iterate" is a word I learned to dread in my long years as an indentured servant.

The art’s by Gregory Manchess; art direction by Irene Gallo.

So here‘s your chance to thrill at the fighter planes, the finnified rockets, and the various airships that they didn’t use. Neat! Or, you know, edifyingly uplifting!

*I mean that in the best possible way, you know.

This entry was posted on Friday, October 2nd, 2009
and was filed under Found on the Web
There have been no responses »