I’m more pleased than a bucket full of grinnets to show you my cover for Matthew Hughes’ new collection Devil or Angel & Other Stories – which is now available in eBook and printed form at Amazon, at Hughes’ own Archonate Bookstore, and elsewhere.

You can get the book in epub or mobi format from The Archonate Bookstore, as well as the printed version. The mobi file is up at Amazon but the paperback version isn’t quite there yet

I’ve been formatting Hughes’ self-published books for a couple of years now, but this is the first time I’ve also done the cover illustration for one.

This was a great one to do, too. Hughes’ work is often – though not always – humorous, as you may judge by the cover. Many of the stories in here remind me of those short, hilarious science fiction stories that Fredric Brown used to write; and since Hughes subtitles the anthology “Old Style Science Fiction and Fantasy Tales” I took that as permission to treat the cover a lot like some of the funnier covers for some of the funnier books that I used to harvest, on bicycle, from the used bookstores all over town during my peculiar childhood.

Now, you may know Hughes best for his Archonate novels (like Majestrum, The Spiral Labyrinth, and others) but only one of these selections has ties to the Archonate. The rest are stand-alone tales, many from The Magazine of Fantasy and Science Fiction or Asimov’s, and a few that were commissioned for anthologies like Old Mars or Songs of the Dying Earth.

And since you may think I’m prejudiced in favor of the book, don’t listen to me. Listen to Gardner Dozois:

If you like vivid adventure science fiction and fantasy, of the sort written by Jack Vance, Poul Anderson, and Roger Zelazny, you’ll like Matthew Hughes too.

Matthew Hughes writes contemporary science fiction and fantasy with a classic sensibility–driven by adventure and thrills, and chock full of sense of wonder.

But, seriously, listen to me anyway. It’s great stuff. Would I steer you wrong?

This entry was posted on Friday, July 31st, 2015
and was filed under Works in Progress
There have been no responses »

A flying scooter for the Retropolis Courier Service 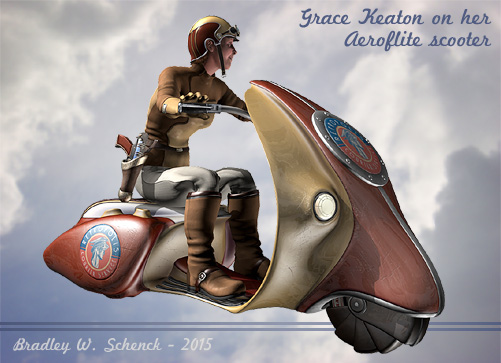 As always when my blog goes quiet, I’m doing stuff; stuff that I either can’t tell you about, or which I’m doing too much of to get around to telling you about it.

This is probably an example of that second case.

I mean, if it was the other one I couldn’t tell you, right?

Before I start wondering about that myself, then, here’s Grace Keaton on her aged but serviceable Aeroflite flying scooter; it’s a work vehicle, standard issue for couriers in the Retropolis Courier Service. Grace makes her deliveries on the notoriously dangerous Route X and she’s the longest-lasting (in fact, the only surviving) courier on that route.

Route X couriers make four times the wages of normal couriers and Grace works half days. That’s a comfortable living for a graduate student. Unless you weaken.

But somebody has to deliver along Route X. How else would the denizens of Retropolis’ Experimental Research District get their ‘mildly’ toxic chemicals, their suspiciously glowing minerals, or their generally illegal biological specimens?

I’ve meant for years to model a flying motorcycle. It’s just recently that I understood that a motorcycle isn’t really what you’d want: you need something much more like a Vespa. So this one’s about done (though it still needs a little trailer for those more cumbersome packages).

This entry was posted on Friday, July 17th, 2015
and was filed under Works in Progress
There have been 4 Responses »