Matthew Hughes’ new book, 9 Tales of Raffalon, at an introductory price of just 99¢ 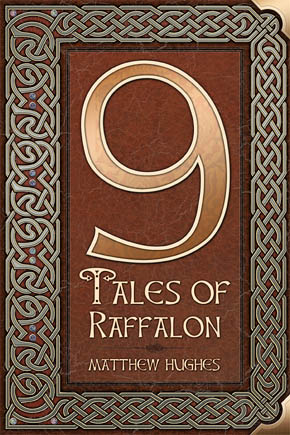 Over at the Archonate, where Matthew Hughes can be found, you can now get his collection 9 Tales of Raffalon as an eBook for the introductory price of just 99¢.

Seven of these stories have appeared previously in The Magazine of Fantasy and Science Fiction; one (The Inn of the Seven Blessings) was written for the Gardner Dozois/George R. R. Martin anthology Rogues; and one (the novelette Sternutative Sortilege) is seen here for the first time.

It’s a surprisingly long collection, as large as a novel, and since I’m the guy who just formatted it you can believe that I know what I’m talking about. I also got to do the cover for this one – you can see it here.

In an age of wizards and walled cities, Raffalon is a journeyman member of the Ancient and Honorable Guild of Purloiners and Purveyors. In other words, a thief.

His skills allow him to scale walls, tickle locks, defeat magical wards. He lifts treasures and trinkets, and spends the proceeds on ale and sausages in taverns where a wise thief sits with his back to the wall.

But somehow things often go the way they shouldn’t and then Raffalon has to rely upon his wits and a well calibrated sense of daring.

Here are nine tales that take our enterprising thief into the Underworld and Overworld, and pit him against prideful thaumaturges, grasping magnates, crooked guild masters, ghosts, spies, ogres, and a talented amateur assassin.

Like several of Hughes’ recent works this one takes place after the Universe has completed its transformation from a realm of reason into one ruled by Sympathetic Association – which we might know better as “magic” – and which, in that state, bears a strong resemblance to Jack Vance’s Dying Earth.

As always with Hughes, highly recommended. Go get one for less than a dollar!

This entry was posted on Friday, April 21st, 2017
and was filed under Found on the Web, Works in Progress
There have been no responses »

New promotions, reviews, and a giveaway for ‘Slaves of the Switchboard of Doom’

We’ve just passed the two-month mark in the countdown to Slaves of the Switchboard of Doom; so the great gears of the publicity machine have begun to turn and grind away at last.

The thing you want to know first is that Tor Books has started a giveaway over at Goodreads. Ten lucky readers will get their very own copy of the book for the low, low price of absolutely free!

Just enter (up until May 15) for your chance to win one of the ten hardcover copies.

Still not sure whether you should spend your hard-earned no dollars at all on the book? Well, it’s now available to book bloggers through NetGalley, and that means new reviews: highlights include this review at The Review Curmudgeon and Brad K. Horner’s review at Goodreads. So go read ’em; I know you listen to those guys more than you listen to me.

In the weeks ahead we can look forward to more. I have a guest post and an interview that will be appearing soon, and I’m told there will be more of that before the book’s release on June 13.

So now that you’re completely sold on the book I’m sure you’ll want your very own poster or T-shirt featuring the cover (or, as we see above, the original cover concept.) Because, honestly, who wouldn’t?

This entry was posted on Monday, April 17th, 2017
and was filed under Slaves of the Switchboard of Doom, Thrilling Tales of the Downright Unusual, Works in Progress
There have been no responses »