Embossed leather journals with one of my Celtic Art pentacle designs 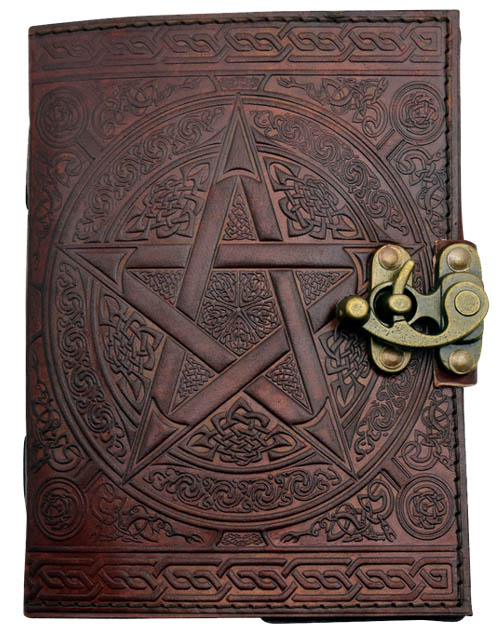 Last year I licensed one of my Celtic art designs to a company that makes embossed leather journals for both retail and wholesale customers. These showed up awhile back on the wholesale site; I’ve been waiting for them to appear at the retail site before I posted about them.

The upper picture’s from the web site. Down below there’s one I took of the sample they sent me.

This is a variation on a pentacle design that I did about fifteen years ago. It’s one of the most popular of my Celtic designs, and it’s also so widely pirated that I doubt I’ll ever do anything like it again. The problem we faced here is that the image never existed as a line drawing, and what you need for the embossing die is a simple line art treatment. 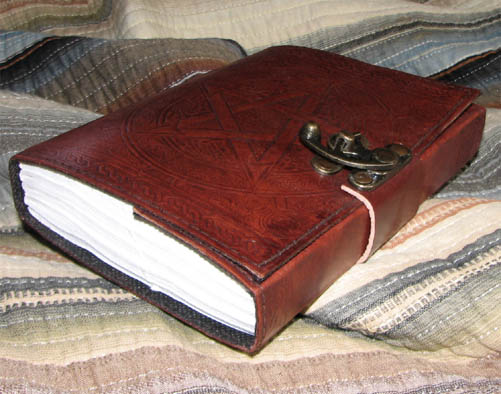 The original image was painted directly in Photoshop and now, so many years later, I only have a few of its layers isolated. So an artist at the company reverse engineered a line art version so that they’d have one.

It’s a really nice job – it’s much better than I expected – and the only quibble I’d make is that we lost the dragons in the wide circular band. Chances are they had so many tiny details that they just weren’t practical here, so they’ve been replaced with a pattern of spirals. The dragons in the corners did survive, though, and I guess that was a heck of a lot of dragons anyway.

You can just see in the second picture how the cover wraps around into a flap behind the latch. The back cover and flap are also embossed (though not with designs by me) and there’s even a narrow stripe of knotwork that runs around the spine and the outer edge of the flap. I’m really pleased with them.

The journals are available in brown or in black, with 120 pages of handmade linen paper, at $32.95 each.

This entry was posted on Tuesday, March 29th, 2016
and was filed under Works in Progress
There have been no responses » 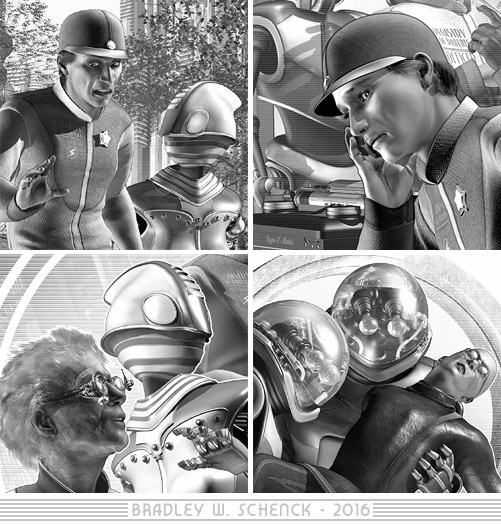 Twice, since December, I’ve posted some mysterious cropped images from things I’ve been working on (here and here); and each time I’ve posted them without any explanation. Today makes the third time. But today, guess what? I’m going to tell you what they are.

Starting in June I’m going to serialize a series of short stories at Thrilling Tales of the Downright Unusual. Now, the Thrilling Tales site is mostly known these days for the Pulp-O-Mizer. That’s because I haven’t run a real serial over there since the conclusion of The Lair of the Clockwork Book. But that will change in June, when you’ll see the first of five stories set in the Retropolis Registry of Patents.

That’s a department of government that oversees patent registrations for the city’s Experimental Research District, from which all Mad Science flows; but the Registry also has a secret purpose that Registry Officers and Investigators never mention in public. Because that’s what you do with a secret purpose.

I just finished the first draft for the fifth story; twenty-one of these stories’ thirty-four illustrations are also done. After the fifth Registry story there may also be a stand-alone story, but you won’t see the conclusion of the Registry of Patents series until they’re all collected in print and eBook form sometime next year.

That collection will contain all six of the Registry stories plus three or four other stories about Retropolis. They’ll all be pretty profusely illustrated.

I’m making some format changes for this series. Past Thrilling Tales have featured updates (that is, web pages) with a wide variation in word counts. That’s caused problems when it came to laying out their print editions. Some serious problems. So this time each week’s story update will run pretty close to one thousand words, with an illustration.

That makes the book layouts much easier to handle even though it still results in one heck of a lot of illustrations. Which, seen one way, is nice. But it means that my nose has been pressed into my monitor for the past few months; and my nose is likely to stay there for awhile longer.

The new stories will also feature illustrations in black and white, as you’ve been seeing. The cost of the full color illustrations in my earlier books put a lot of limitations on where and how you can buy them. Also, I’ve decided that Black and White Is Cool.

So that’s it. That’s what I’ve been doing, and what I’m still doing, and you ought see it for real in June when we begin with The Purloined Patents of Doctor Brackett.

This entry was posted on Tuesday, March 22nd, 2016
and was filed under Thrilling Tales of the Downright Unusual, Works in Progress
There have been 2 Responses » 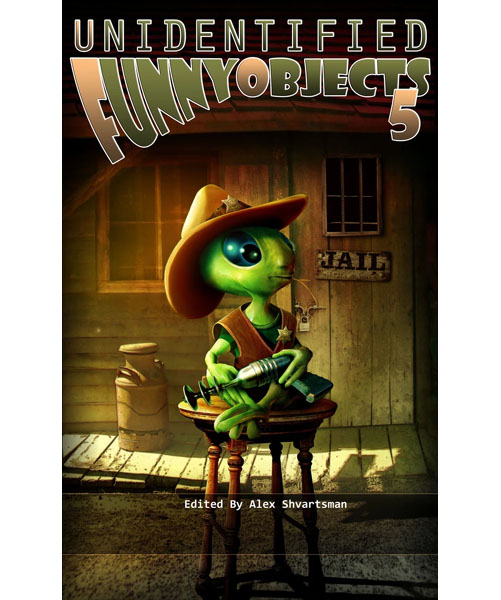 The Kickstarter project offers rewards that range from eBooks of previous humor anthologies ($5) through a paperback copy of UFO #5 ($20) and then rears up in its gel-filled tank to snap at unsuspecting lab assistants with a horrifying (though funny) head at the end of its colorful (though repulsive) neck with additional rewards that include original art and full sets of UFO Publishing’s eleven volumes of hilarity. And then there’s other stuff that wouldn’t even fit into a sentence that went on as long as that last one.

My rediscovery of humorous science fiction started with Henry Kuttner’s Robots Have No Tails and it isn’t done yet with the stories of Fredric Brown, only because there are so many of them. So I’m really happy to see people continuing that tradition with all-new stories in this crowdfunded series of anthologies. Be the first on your block to own one!

This entry was posted on Saturday, March 5th, 2016
and was filed under Found on the Web
There have been no responses »