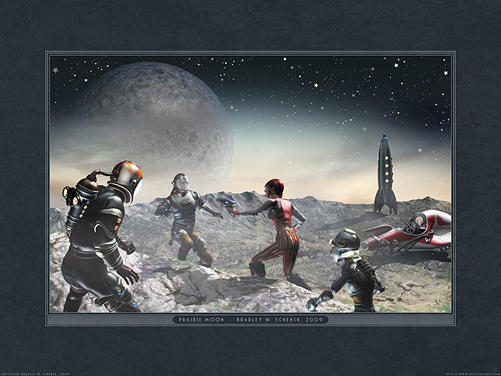 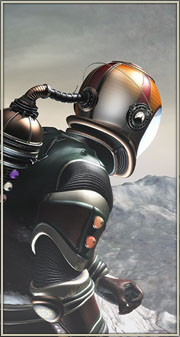 One thing’s certain on any frontier – whether it’s in Wyoming, or on an unnamed moon somewhere near Cygnus – and that certainty is that it’s best to be polite when dropping by.

Just imagine the mortification of these spacemen who – and really, this was probably innocent – have set down their retro rocket on the surface of what seemed to be an uninhabited moon. Oops!

“Prairie Moon” is an 18 by 24″ archival print (a poster and a postcard are also available) and is also the name of a song from the 1930’s that was pivotal in Dennis Potter’s wonderful “Pennies From Heaven”. The picture itself is a purely digital image which I created with 3DS Max and Photoshop.

This entry was posted on Saturday, May 30th, 2009
and was filed under Works in Progress
There has been 1 Response »

Space Piracy! A wide-open field in which the sky is, in fact, not the limit. Where any able space man or woman can rise through the ranks not merely because of experience or merit, but due to his or her devious and ruthless exploitation of social interactions.

In this, space piracy is like most of the day jobs I’ve had.

If it were a thankless job it would still need doing – but happily, the Space Patrol is almost universally admired, and there are benefits – edible food! Spartan accommodations! Your own ray gun! Affable second lieutenants!

By signing on, you will enter into a new career of interplanetary adventure: you may meet, and blast into small quivering bits, the Awful Green Things From Space! Pursue Space Pirates! Endure a station rotation in corners of the galaxy where nothing has ever happened and where, almost certainly, nothing ever will!

Each is available (even if you don’t enlist) on t-shirts at the Retropolis Transit Authority, and on coffee mugs, greeting cards and other gear at the Retropolis Travel Bureau – two agencies, each committed to finding career paths for the enterprising youth of the Future That Never Was.

Also available on posters, blank books and whatnot at Celtic Art & Retro-Futuristic Design.

This entry was posted on Monday, May 25th, 2009
and was filed under Works in Progress
There have been no responses »

The Retropolis Travel Bureau – inviting you to visit the retro future

The second of my new Zazzle stores is called the Retropolis Travel Bureau – yet another agency (like the Retropolis Transit Authority) of the retro future. Give me enough time, and I could probably put together an entire New Deal for the Future That Never Was. 🙂 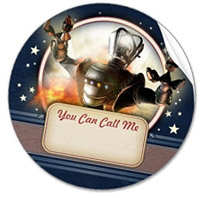 Like Ars Celtica, which I mentioned yesterday, I’ve taken advantage of a new product range to make some customizable items like business cards (check out the Airship Captain!), postcards, and greeting cards.

Something unique to the Travel Bureau, though, is a selection of retro-futuristic name tags. They’re also customizable, so their default label (“You can call me…”) can easily be changed to the name of an event – like a party or convention, for example – and even the names can be added, though you probably wouldn’t want that since all six tags on a sheet get the same text. I really enjoyed making these.

And also like Ars Celtica, there are some uber cool coffee mug styles and other items to choose from.

I had a great time customizing this store, including a “Tourist Info” page that’s basically the Travel Bureau’s newspaper. It’s got tourist advisories and the sort of news items you’d be likely to find in a community newsletter of this type. With mad scientists and space pirates thrown into the mix, of course.

This entry was posted on Thursday, May 21st, 2009
and was filed under Works in Progress
There have been 2 Responses » 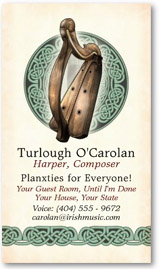 So for the past few weeks I’ve been working on a couple of storefronts at Zazzle, and right about now the shop designs have settled in and the first lines of products are ready for prime time. Ars Celtica is a Celtic Art themed store; some of my favorite new products there are the customizable business cards (what a great idea!) and I had a great time working up the first designs for those.

They let me offer some really nice coffee mugs. Another thing I worked up is a series of Celtic border magnets – they’re square sections of knotwork patterns that you can put together into borders. Neat!

The postcards are also pretty spiffy. I treated them like the kind of fine art postcards you might pick up at a museum. For the moment – unfortunately! – I haven’t made available high resolution posters and prints. I’d sure like to, but the system that handles large prints over there just doesn’t offer the control over print sizes that I need.

Otherwise, though, I’m really happy with what I’ve got going over there and I’ve enjoyed customizing the shops. Fun times!

This entry was posted on Wednesday, May 20th, 2009
and was filed under Works in Progress
There have been no responses »

A T-Shirt Sale Named After Me! Or By Me.

Hey! Every so often my friends over at Printfection turn a sale on over at the servers where my Retropolis Transit Authority lives – and for about a week, you get some sort of deal on my “Nifty T-Shirts from Yesterday’s Tomorrows”. But this time they’ve done something unusual.

They let me name the discount coupons myself!

I know, I know, you’re thinking “self involved”. But it’s kind of a kick. Well, okay, for me, anyway. But why not enjoy my elation, if only vicariously? I’m normally so glum.

Here’s how it works. Go look at the streamlined & modern T-Shirts at Retropolis Transit, add one or more to your cart till your order (before shipping or tax, if applicable) meets the minimum order requirements, and enter the discount coupon during your checkout.

Hint: since the dark colored shirts clock in at just over $25, you’re almost sure to qualify for a $5 discount. And on a $100 order you almost, but not quite, get one free.

Printfection’s impregnable fortress sits on top of the Rocky Mountains – so the sale ends at midnight, Mountain Time, on May 16.

This entry was posted on Monday, May 11th, 2009
and was filed under Hodgepodge
There have been no responses » 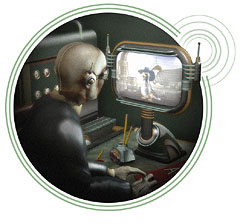 Two weeks ago I started to set up my first gallery/store at Zazzle; when the powers that be there saw what I was putting on the gallery’s front page they ushered me into the closed beta of their new Store Customization system. I set up a second gallery there this week, and the other night they opened up the beta so everyone could play.

This turned out to be perfect timing for me. I’d had a chance to experiment with a system that was almost ready for release (this means there was documentation!) and which as a result was pretty solid. I’d gone through about a week and a half of trying to figure out how to do the things that just about anyone would want to do and it was all fresh in my mind.

So I wrote up three tutorials at the Zazzle forum, which I’ve retooled a bit and reformatted to post here.

This is a step-by-step tutorial with sample graphics. It shows you how to use three small images, some CSS, and some HTML to change the appearance of your Zazzle sidebar.

2. How to Reorganize Your Zazzle Sidebar

This shows you how Zazzle’s modular elements fit together to build a store’s sidebar, and how you can move those elements around till you like ’em.

3. How to Add a New, Custom Page to Your Zazzle Store

Here’s another step-by-step tutorial that helps you to create an entirely new page, which comes up in the sidebar like any of the standard pages and can contain your own custom content. It’s much easier to do than to explain!

This entry was posted on Sunday, May 10th, 2009
and was filed under Print On Demand, Web Development
There has been 1 Response »