Machinalia – the art of Boris Artzybasheff

If I were to call some of Boris Artzybasheff’s illustrations “biomechanical” I’d probably be right – but you’d end up expecting something more like H. R. Giger, and less like the interesting blend of Virgil Finlay and Stanislav Szukalski that we find in his body of work.

Artzybasheff, a Russian immigrant, was a mainstream illustrator and so not all of his work for magazines and ads reflects what looks like his special interest in anthropomorphizing machines and projecting our human nature onto our machinations. Or is it the opposite?

But there’s plenty of that, especially in the drawings for his own books (like “As I See”) – and in fact his other work is pretty interesting, too.

And thanks for the heads up go to The Beat.

This entry was posted on Wednesday, November 28th, 2007
and was filed under Found on the Web
There have been no responses » 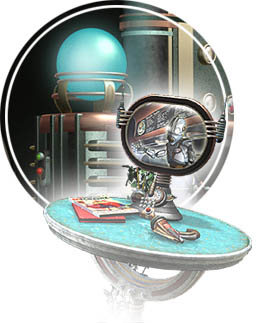 I just fell over this entertaining post at Brain Handles; it’s the transcript of a technical support call for Acme’s Giant Death Ray, which the customer bought from Amazon. I do hope he got the free shipping.

Great stuff, especially if you’ve ever fielded a tech support call yourself – I used to get them from time to time even though they weren’t for me.

Example: “Look sonny, I typed up my first plan for world conquest using Paperclip on a Commodore 64. I’ve been asked “did you reboot” more times than you’ve been laid.”

This entry was posted on Monday, November 26th, 2007
and was filed under Found on the Web
There have been no responses »

I’ve just posted the latest Incredibly Occasional Newsletter at Celtic Art & Retro-Futuristic Design; because of the several new ventures I’ve kicked off this year, it’s also got updates for Saga Shirts, The Retropolis Transit Authority, and even Hot Wax Tees. Because this is the time of year when you need to be jolly and generous, and when I get to try to shake all the change out of your pockets. Um… that’s YO Ho Ho, to you.

This entry was posted on Tuesday, November 20th, 2007
and was filed under Works in Progress
There have been no responses » 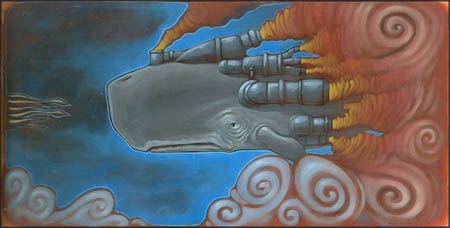 By day, he creates concept art for computer games; by night, he dons his surrealistic cape and ventures out to paint weirdness and wonder. Roland Tamayo’s surreal acrylic paintings and drawings dip into the inkwell of his recurring motifs and recombine them in new and unexpected arrangements. That’s traditional – Magritte, de Chirico and Dali all used their own icons in much the same way.

Here we’ve got whales, tortoises and squids coexisting with televisions, buildings, microphones and trees. It’s wonderful stuff to look at, by which I mean: you ought to.

This entry was posted on Thursday, November 15th, 2007
and was filed under Found on the Web
There have been no responses »

The Curious Case of the Do-it-Yourself, Direct to Garment T-Shirt Printer Video

Much is left unsaid about this conversion of an Epson C88 printer into a do it yourself, direct to garment T-Shirt printing machine (for example, what the heck sort of inks or dyes are being used here?) and although it’s unlikely to be much of a production solution, even on light colored shirts…. isn’t it just damned interesting?

The creator says it’s a $150 project, and that plans will be sold in the future as the diyTs T-Shirt Printer. You can see that there’s a custom built carriage, but you can’t tell much else about it. And why is the image being printed sideways? If it were printing the image vertically there’d be no real limit to the height of the design. Apart from the length of the shirt, of course.

Thanks for the heads-up go to to Jean Roth.

Update: there’s a thread about this, started by the creator, at Rodney Blackwell’s T-Shirt Forums.

This entry was posted on Wednesday, November 14th, 2007
and was filed under Print On Demand
There have been 3 Responses »

Eye of Ra Photography is the new online photography gallery of my long lost cousin, Katie McCarley. Well. Okay, she’s not lost. Nobody lost her. We’ve just never met. “Long lost” just sounded better, or anyway I thought so, until I saw the end of this paragraph. Now that I’m here, I’m just not sure any more.

Now that we’ve found her, though, we should be interested in seeing these pictures. They range from documentary protest photos, some of which remind me of my San Francisco days, to architectural and animal photographs (including the only zebra that’s made me laugh and leap, simultaneously) to all sorts of miscellany. My favorite’s this trio of three-legged lucky frogs from a New Orleans voodoo shop. There’s also some digital work, mainly photomanipulation, along with fractals.

Katie’s gallery site is new, but some of these are also available as prints in her Deviant Art pages.

This entry was posted on Friday, November 9th, 2007
and was filed under Found on the Web
There have been 2 Responses »

I’ve just run across this amazing presentation on YouTube – and as I dug a bit deeper, I found that one of the most amazing things about it is that it originated in 1999, to accompany a SIGGRAPH paper by Volker Blanz and Thomas Vetter. It’s not that 1999 is actually ancient history – it’s just that the technology behind this is so very interesting that I don’t understand why it hasn’t already worked its way down to commercial applications (unless it has – but more on that below).

This demo shows how a 3D database of 200 textured male and female faces was used as the foundation for a human face modeling system, and much more – among other things you’ll see how the software uses its raw data to extrapolate a 3D face from a single photograph. It even invented matching textures, whether the photo was in color or in black and white. The same techniques were used to generate expressions for the faces.

In the rest of this post I’m going to muse about what all this could mean. So in the interest of full disclosure I must admit to you that in my last post I mentioned that I was skinning a set of 3D characters, and that skinning characters – without fail – drives me insane. It doesn’t take much of a leap here for you to realize that you are probably reading the thoughts of a crazy person. So make of this what you like.

END_OF_DOCUMENT_TOKEN_TO_BE_REPLACED

This entry was posted on Sunday, November 4th, 2007
and was filed under Can't Stop Thinking, Computer Graphics
There have been 4 Responses » 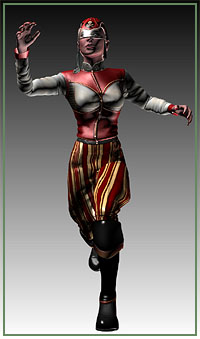 Always. Has. Always. Will.

This entry was posted on Saturday, November 3rd, 2007
and was filed under Computer Graphics, Works in Progress
There have been no responses » 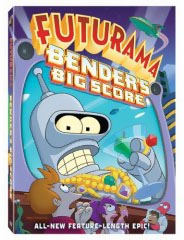 It looks like Thanksgiving will be the time to stock up on a few cases of Slurm and kick back in the Robolounger, because Amazon is now taking pre-orders for the (first!) Futurama movie on DVD.

Yep – the evil Fox Empire did indeed axe Futurama several years ago – but they’ve been so pleased by its sales on DVD that they’ve contracted for up to four direct to DVD movies from Matt Groening et al.

Each of the direct to DVD movies will also be sliced up into separate episodes for airing on Comedy Central (and – one assumes – elsewhere, as time goes on). This first movie is scheduled for a November 27th release on DVD.

“Bender’s Big Score” sends the crew of Planet Express on a time traveling adventure that involves nudist alien Internet scammers, Leela’s love life, and Fry’s buttocks. It is not to be missed

This entry was posted on Friday, November 2nd, 2007
and was filed under Reading / Watching / Consuming
There have been no responses »