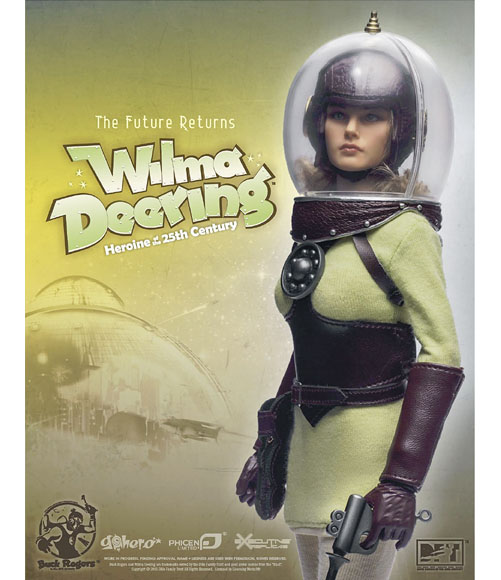 I’ve said before that one of the seminal influences on my Retropolis art is the earliest of the Buck Rogers comics, from 1929 on. This makes Wilma Deering the mitochondrial ancestor of all the swell dames in my retro future. (Also of everyone else; but do we have to get technical here?)

Wilma knew all the ropes of the twenty-fifth century by the time Buck woke up there: her inertron jumping belt helped her leap in great, dreamlike bounds because its antigravity made her nearly weightless; she had her own personal rocket ship; and, of course, she had her stylish (but lethal) atomic pistol.

Go Hero has been turning out some terrific high end action figures based on familiar characters like The Shadow, Dan Dare, and Buck Rogers. I’ve mentioned those here before.

The Go Hero limited edition Wilma Deering is now available for pre-order. She’s a highly detailed figure with a visored cap, bubble helmet, four pairs of hands, and accessories like the jumping belt and ray gun. She’s scheduled to ship in the third quarter of this year and she’s certain to look fantastic while she defends your desk from the unspeakable perils of outer space. 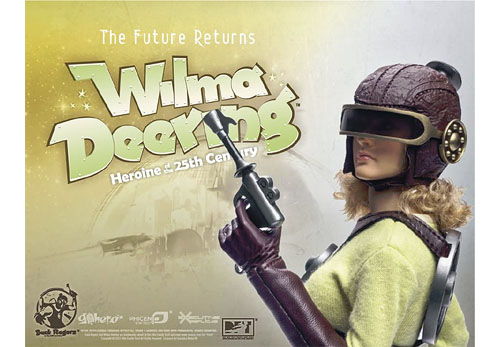 This entry was posted on Saturday, March 14th, 2015
and was filed under Found on the Web
There have been no responses »