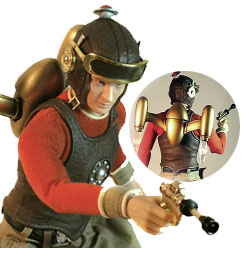 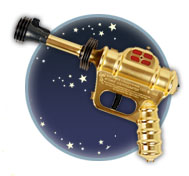 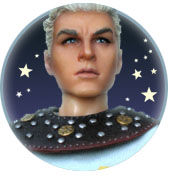 A great figure. I’ve spoken a number of times with the man behind the toy, and he’s as dedicated a fan of Buck, Flash, and all of the 1950s space heroes as you’re likely to find. His work is really top-notch; his attention to detail just blows me away.

I’ve got an original U235 Atomic Pistol, and I’ve handled a number of original XZ-38s. I had a chance to take a good, long, close look at the replica, and gain, it’s a great toy. Exact? No, not really. But close enough that fans of the gun who might balk at spending $200+ on eBay for a beaten up example will be more than satisfied. It’s a reproduction that works as a beautiful collectible, but also a really fun toy. (And isn’t that the point?)

Oh, for the record, I’m not in any way associated with Go Hero or anything. I don’t even own the figure or the reproduction gun — I already spend too much on vintage toys! But as someone who’s seen it all up close, I figured I’d chime in. (Oh, and I’m not in any way connected to Go Hero — I just like me some fancy-pants space toys!)

The only one of the old Buck guns I’ve seen up close and personal was the smaller “Wilma” gun – and its price was about as scary as the idea of getting disintegrated. My ray guns are all 3d models!

I didn’t order one of the Buck figures – and sadly, in the current economy I’m not likely to – but it sure looks spiffy to me. Even though I’m not as big a fan of Flash, that one is looking pretty great too. I’m just happy to see things like this out and about in the world.

The nice thing about some of the Buck Rogers guns — the XZ-31 Rocket Pistol and the U-235 Atomic Disintegrator, in particular — is that they were so popular that thousands upon thousands were produced. And Daisy, the company that made them, had such high quality control that many still survive today.

While high-grade examples will definitely set you back a pretty penny, nice-but-not-as-nice examples of the guns often sell for much more reasonable prices. I’ve seen beautiful, if not dead-mint, examples of the XZ-31 and U-235 sell for much less than the reissue. And while you don’t get the lovely wooden case or the lead figure, you do get an actual piece of history. Priceless, in my book.

Anyway, if one of them is really something you want to own, just sit tight and watch eBay — the right toy at the right price will come along. No one, and I mean no one should be forced to go without a nice, solid, reliable ray gun!

um.. i don’t think so that this figure can play its radio show or anything else. It doesn’t have mp3 players. Where can i use a remote controller?

nice blog my sort of thing anyway from stugod

Just took delivery of Buck Rogers, just superb detailing and the parts are extremely well made , bit of an issue with replacing the hands difficult to change the hands for the gloved version and the glass helmet straps are a pig to tie together but got there in the end

The mp3 player in this figure is just superb, very loud with one episode of vintage Buck Rogers radio episode already loaded,. not easy to load new tracks as you have to remove the belt and pull up the shirt and leather vest which is not easy without thew potential of damaging the seam on the rubber material of the vest, same the other side with the switch to turn on , very fiddly again,hard to reach the play and record buttons at the back as they are again quite high up the back of the figure so you have to fold the vest up and again possibly damaging the vest , the remote control helps with this operation but as mine was missing from the set its a bit of an issue till I get a replacement ,
Over all very worth the $110.00 I paid and just about the best looking Buck Rogers figure if seen …………….ever