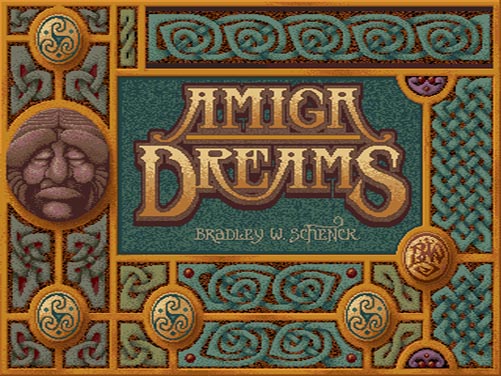 Back in September of 1987 I bought my first Amiga computer. It was an Amiga 500 – the least expensive Amiga, but with a whole megabyte of RAM. Less than a year later I’d use it to win the BADGE Killer Demo Contest, whose first prize was an Amiga 2000.

In the Fall of ’87, though, that was still a ways off. A long ways, as far as I could see: because although I wanted make pictures and animations, I was having some trouble learning to draw with a mouse. So I sent some of my pencil sketches off to a service bureau, where they were digitized with a video camera, after which I planned to paint them on my new computer. But before the scanned images came back I went to an eye-opening presentation by Jim Sachs at AmiExpo. Jim was doing fantastic artwork… and all of it with a mouse.

So I returned home and went back to drawing with what felt like a small brick, and I’d gotten the hang of it by the time my digitized sketches arrived, in the mail, on a floppy disc.

In October and November I got pretty busy with my mouse and Deluxe Paint II – and my scanned sketches – and I turned out a bunch of pictures. I put them all together with a shareware slideshow program, and zipped them up, and uploaded the slideshow to BBS systems across the country. Because that’s what we did in 1987, with our modems. On our landlines. After walking six miles through a snowstorm.

The Amiga Dreams slideshow was a portfolio that I used to approach game companies. It spread pretty far across the BBS’s and it introduced me to a whole lot of people, some of whom I still know.

I recently ran across a copy of the original slideshow at Aminet and I downloaded it. (I didn’t even have a complete copy any more.)

Now, it’s hard to simply show you the original images – mostly in 16 or 32 colors – because the aspect ratio of the Amiga’s pixels was different from the square pixels that computers use today. I had to scale these to get the images themselves into the correct aspect. So what you see here isn’t a literal version of what I did then, but the pictures look the same. 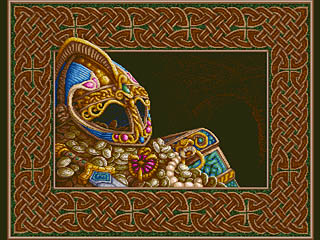 These days, people call this "pixel art" – which is a pretty silly label – because one often worked with individual pixels, in solid colors, and from a limited palette. I used to say that I knew all my pixels by name. I almost wasn’t kidding.

Like most of the Amiga Dreams pictures the original resolution of the one above was 320 by 400 pixels, and I painted it with a palette of 32 colors. It was based on a little pencil sketch from my sketchbook. 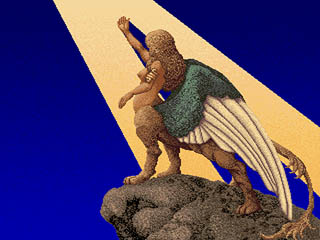 Here I took an old drawing for a watercolor and painted it over again in Deluxe Paint. This one was also 320 by 400 pixels. You can see that I managed pretty decent gradients for the sky and the beam of light; but it cost me quite a few of my 32 colors. 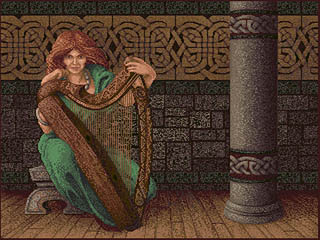 Part of this picture was originally a pen and ink drawing.The digital version became better known a year or so later when I did a new, expanded version (in portrait aspect) for the cover of Amiga World magazine. Once again, this one was 320 by 400 pixels in 32 colors.

To do the portrait aspect version I rotated the image 90 degrees and turned my video monitor on its side. The monitor wasn’t too happy about that, but it was nothing a little degaussing couldn’t cure. 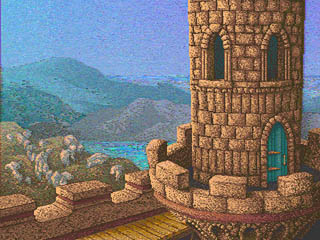 The Amiga’s Hold and Modify graphics mode was made up of equal parts of inspiration and dementia. You could use up to 4096 colors, but the color values were stored as the difference between the current pixel and the pixel to its left. Because the early Amigas used video displays there were limits on how many of these changes could happen on a given scanline, and how large the color changes could be from one pixel to the next.

If you used a HAM paint program you had to deal with strange color fringes shooting off to the right while you worked. This caused undesirable mental effects in laboratory mice, and in me.

I almost never painted in HAM after this one. HAM turned out to be great, later on, for 3D rendering, or for images that were painted in 24 bit color and converted down. But painting in HAM? It was possible: I just never liked it. I painted this picture in HAM with Digi-Paint.

Interesting note: another HAM paint program showed up a few years later. It was called Photon Paint, and it was written by the young Oren Peli – better known in this century as the writer/director of Paranormal Activity. It’s a small world. 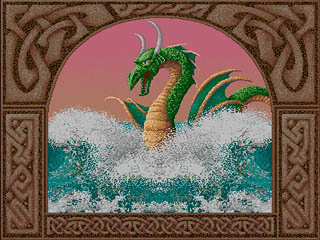 I can’t quite remember the provenance of this one. It’s possible, and maybe even likely, that this was the first thing I drew from scratch with a mouse. The original was once again 320 by 400 in 32 colors. 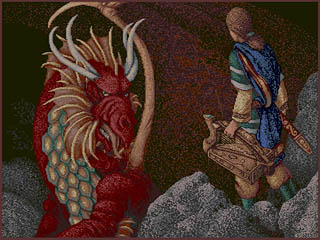 Here’s another 32 color image, this time based on a couple of my pencil sketches. My original drawing of the dragon turned into a forgettable oil painting: I think it’s better off here. 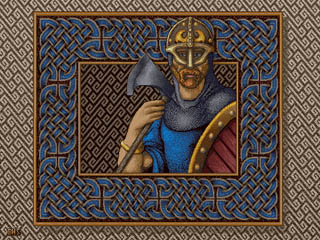 This picture’s claim to fame is that it was the beginning of a dithering technique I finally mastered in the following year (more here).

At 640 by 400 pixels I could only have a 16 color palette. So I used part of that palette for a range of warm greys, and the rest for hues.

I used these colors in a checkerboard dithering pattern: the greys for values, and the hues for color. It worked pretty well, especially on a video monitor where the alternating pixels

tended to bleed together. Here’s a literal detail at twice its original size.

In practice, I painted areas with solid hues and then drew diagonal grey lines through them. I’d go over the grey lines with lighter and darker greys, either pixel-by-pixel, or in shorter diagonal lines. I also defined checker fill patterns with the 50% grey and one color, filled an area with that pattern, and then retouched the values from there. 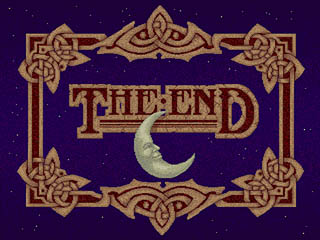 And this was the end, of course, in a Celtic knotwork border. I had pages and pages of knotwork designs for my drawings and paintings, earlier in the decade: I turned a lot of them into Amiga graphics in limited palettes, as we see here.

Years later, when I was building my first web site, I turned many of my early Amiga knotwork patterns into web-friendly clip art; those pages are still up. There’s even an animated Celtic knot that I painted in 1988 for the Charon demo that won me my second Amiga.

So these are my very first computer graphic images. It’s strange to see them again. Things were so different in 1987 that it seems like somebody else’s ancient history. I can’t even recall what treasures I myself found through the BBS systems of the day; there was wonderful art and freeware and shareware. It was a pre-web world, but our data still got around.

And I haven’t even mentioned the computer user groups, like VAUX, SFVAUG, and the others I used to visit, back when using a computer – or a particular kind of computer – made you an honorary member of unsecret societies across the globe.

This entry was posted on Tuesday, July 29th, 2014
and was filed under Computer Graphics, Works in Progress
There have been 11 Responses »

This brought back a lot of memories. I surely do remember that fringing in HAM mode, but hadn’t thought about it in probably 25 years. There are STILL some aspects of Deluxe Paint that I miss in my professional motion design work, like animbrushes. Thanks for the walk down memory lane.

Craven, the thing about DPaint that I really miss was the way you could just pick up any part of an image and paint with it, using the same painting tools that you used for anything else. It was just so direct and natural a way to work. Big kudos for Dan Silva for the amazing tool he made.
And Eric, I’m not sure you’re right about all that… but I’ll allow anybody who goes around winning Oscars to fool himself a little, on my account 🙂

Thank you for this blast from the past… I remember almost every single one of those images, even though I haven’t seen them for decades. Your ability to rise above the medium’s limitations was always an inspiration, and caused me to mutter worse and worse expletives under my breath with every new piece you did. Or maybe I mean “better and better expletives.” In any case, your work has only improved over the years… which is completely unfair.

Thanks for sharing your amazing artwork (found it via Eric’s Facebook page) .

I got to the computer graphics party very late … back in those days I was a traditional pencil and paper animator and I didn’t think a computer had anything to do with what I did (our friend Eric Daniels was also a traditional animator, but he had a wider range of interests and wider vision than I did and could see where things were heading … )

I think the successor to DPaint is TVPaint created by Herve Adam . It has the same direct and natural way of working that you mentioned above about DPaint (including creating custom anim brushes from any part of the image)

Oh, yes – I really liked TVPaint; I remember using it on a Retina graphics board. I used TVPaint for most of my late Amiga work in 2D – which included retouching 3D renderings. Great program!

I was 11 in 1987 and I stumbled upon some of those screenshots on a computer magazine I used to read back then, here in this remote North-East part of Italy I still live in.
Well, that very moment I had an epiphany – and decided I would have become a “graphician”. So, thank you sir, I owe you something! 😉

Bernard, I have fond memories of VAUX!

Great article and a fascinating insight into your early work.

I first came across your art when I saw the game Mindroll so very long ago and immediately noticed your unique art style for an Amiga game. I only recently discovered your Charon demo and Amiga Dreams slideshow while scanning through old PD collections, and further research lead me to your wonderful site.

Would it be alright for you if I added your Amiga images to the Amiga Graphics Archive? I run it to showcase remarkable and unique graphics that were done with the Amiga and I think your images would make a great addition to the archive.

Daniel – sure, that would be fine.

Amiga was a great school!!!
Today I use PC but when I want to draw/animate something I fire up the old lady 🙂