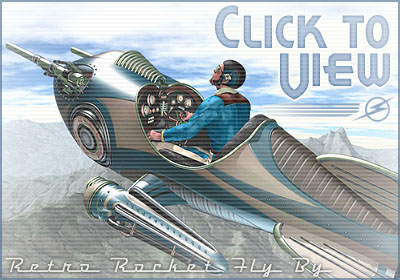 I hadn’t exactly planned on it, but most of my Thrilling Tales work over the Summer turned out to be making and setting up a new group of characters for the upcoming stories. I finished up the seventh character on Saturday, and on Sunday and Monday morning I celebrated by doing something completely different: this animated shot of one of my open cockpit roadster rockets in flight. It’s just a disconnected shot, of course: I think it wants to be part of a promo for my Retropolis web site. I’ll probably let it have its way, eventually.

But as fun as this was to tinker with… I do have actual work to do on the Thrilling Tales stories. During some re-rendering and compression this morning I did just what I probably should have been doing all along, which is to get back to work on the outlines and scripts for the stories.

What I did over the Summer really was productive, though, and not just because I needed the characters for my illustrations. Because as I worked on them my brain was exploring just how I want the two stories to

work. And it was only when I started to know these characters better by working on them that I truly saw what they were about, and what they’d do, and how they’d do it. Al Bowwly and his rocket pack were a major revelation.

So this morning I wrote up a new, more complete outline for Part Two of The Toaster With TWO BRAINS. I’m now looking forward to working on the script itself… but the highest priority, as I’ve said before, is the script and the first illustrations for The Lair of the Clockwork Book. That non-interactive story is the one I need to get up on the site first, with regular updates every week, as I start to illustrate the new Toaster With TWO BRAINS story. Whatever its name is. I still don’t know.

So anyway it’s on to the Clockwork Book outline next, and then to its script(s). That means there won’t be much work to share just yet… maybe I’ll work up some set pieces with the new characters in the meantime. For now, though, I recommend a quick trip in my rocket. It did wonders for me!

This entry was posted on Monday, September 13th, 2010
and was filed under Thrilling Tales of the Downright Unusual, Works in Progress
There have been 3 Responses »

…continuing to wait ever so patiently for the Clockwork Book stories…

I’m afraid patience is pretty much what’s called for :). I’m making good progress on the scripts but the biggest delay is always the illustrations.