News from ‘Slaves of the Switchboard of Doom’ – the book giveaway, an excerpt, some illustrations, and pictures of the book

Here’s a round-up of news about Slaves of the Switchboard of Doom. There’s a new excerpt at the Tor/Forge blog, while the ten-book giveaway at Goodreads is winding down with just hours to go.

There’s also a preview of the illustrations and the book’s chapter titles.

And much to my own surprise (since I don’t have one yet) there are some photographs of the real, live, actual, printed book as it waits for your order.

And, well, everyone else’s order too. But mostly yours.

But first, a word from Publishers Weekly

One of the four big trades for book news and reviews has posted its very friendly review of the book.

The review starts with a description of the plot and a few words about the world in which the book takes place; then it ends with this:

“A genuine love for the material makes this a strong and entertaining debut.”

As I write, the Tor Books giveaway for Slaves of the Switchboard of Doom ends soon. That’s less than sixteen hours from now.

So if you live in the United States or Canada you should dive right in and get in line. The odds are currently at 78 to 1. That’s way better than your chance of being struck by lightning.

An excerpt from the book

This just appeared at the Tor/Forge blog: it’s an excerpt from the book’s first chapter.

You can do some mental composition here by combining the excerpt with the Chapter One illustration in this other, different preview post at the Tor.com web site. Can’t you?

Yeah, I forgot one

That’s right. I just referred to the Tor.com preview post, which shows several of the book’s illustrations and calls out its pulpy chapter titles. Like “Return of the Plumber of Prophecy”, which is really does describe what’s happening in the chapter.

Anybody who’s experienced a Plumbing Emergency can tell you that plumbing is of vast (and perhaps galactic) importance.

Pictures of the book

I may have saved the best for last, here, or maybe the sight of these pictures is just so strange, five years after I started the book, that I don’t quite know what to think about them.

My editor posted these shots last week. You can see a stack of the real, final, printed books: 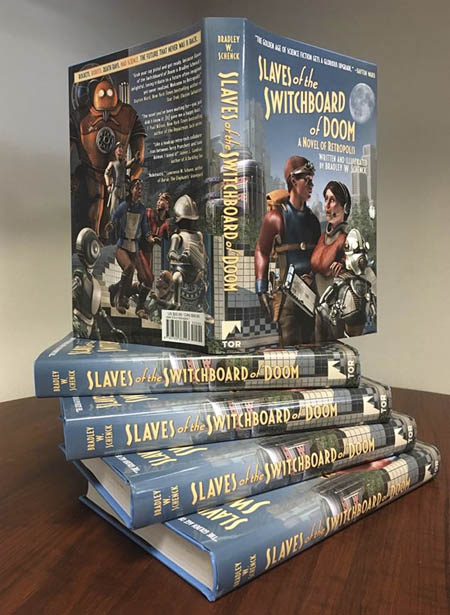 And the book opened up to one of its two-page spreads: 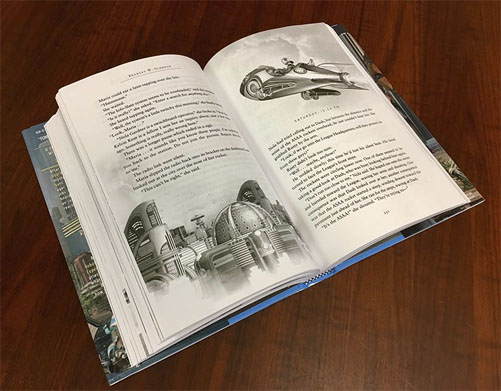 And, finally, a view of the book’s second endpaper: 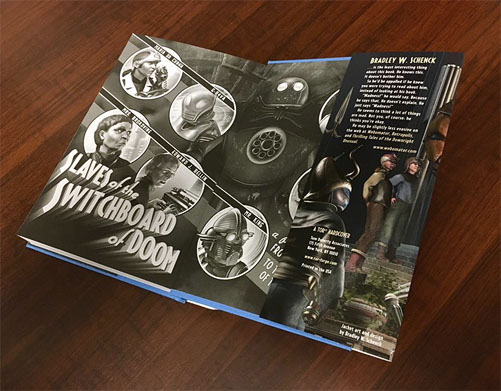 Aaaaaaaaand that’s it for today. Remember, Slaves of the Switchboard of Doom will be available in all the usual places on June 13, just one month from now.

This entry was posted on Monday, May 15th, 2017
and was filed under Slaves of the Switchboard of Doom, Thrilling Tales of the Downright Unusual, Works in Progress
There have been no responses »