Robot indentures in ‘Slaves of the Switchboard of Doom’

Let’s say you have a massive megacity, partly lighter than air, filled with personal rocket ships, intelligent robots, and public transportation that’s both sensible and universal.

That’s not a hypothetical proposition. You can have one. I’ve got one. It’s the city of Retropolis.

“That hardly matters,” I reply, “when I know that you’re an imaginary commenter.”

And you fall silent, so I continue.

I invented Retropolis around the end of the last century. And I’ve spent quite a lot of time there. I began to set stories in my City of Tomorrow about three years before I started tinkering with Slaves of the Switchboard of Doom: but they were short, or at least short-ish, stories, and in a short-ish story you don’t have a lot of room for the details and fiddly bits that are essential when you’re working on something as long as a novel.

In a novel you have to worry a lot more about how all this stuff works: the stuff that’s not important in a short-ish story because it falls outside the scope of what must be known in order for the story to make sense.

One of the biggest fiddly bits was the robots of Retropolis.

Retropolis has a lot of robots. They’re everywhere. And although they are clearly not human people, they are people. They’re just a different kind of person.

Still, making a robot is completely different from making a human person.

“It’s not as much fun,” you interject.

But I have lost patience. “Stop doing that. People are staring.”

In practical terms, a new human’s expense is pro-rated across a couple of decades; a robot’s expense comes completely, and sizably, at the beginning.

Making a robot is an investment. So who’s investing?

That was the question I had to answer. Now, I want to emphasize that I wasn’t looking for a great system. I wasn’t even looking for a good system. What I wanted was a kind of system that human people would think up when faced with this problem.

That’s why I settled on indentures. We’ve used them before. 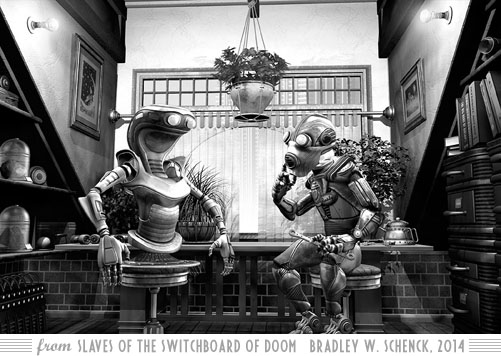 You don’t buy a robot in Retropolis. You just pay for its production. Then that robot is required to work for you, at a certain rate, until its indenture has been paid. Once the robot’s paid off its indenture it becomes a free agent, able to continue working for you (for wages), or to quit its job and work for somebody else, or to set up as a freelancer and work for lots of different people.

Retropolitans are pretty good with systems, and they run their city pretty well, so if you’re going to have an indenture system it’s a good idea to run it fairly, the way they do.

But indentures aren’t perfect. There are lots of ways they can go wrong. And the incentive for making them go wrong is pretty compelling, since it involves making loads of money.

Student loans are a kind of indenture. Any kind of debt can be a form of indenture, once the lender is able to garnish your wages. If you give the indenture holders the ability to change the rules at any time, an indenture may never end: there’s just so much money to be made, if they never end. And an indenture that never ends? That’s slavery.

I remember how horrified I was, once, when I learned that – not fifty miles from my own home – there was a farm where illegal immigrants were saddled with the cost of their travel to the United States, and then forced to work for the farm that had bought that debt. They had to live on site and work, in terrible conditions, while they were charged high rates for their lodging and food. This was an indenture system that was designed to keep those laborers indentured forever. It’s a terrible system that we’ve invented more than once, and which we sadly continue to invent. I’d guess that the people who cook up these schemes often think they’re doing it for the first time. But they’re not. We’ve done the same thing over and over again. 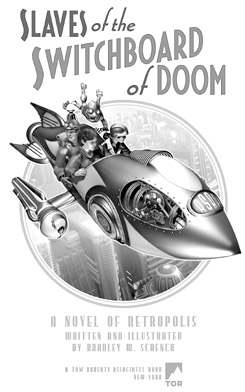 So an indenture system, despite its built-in risks for corruption and abuse, is exactly the kind of system we’d be likely to come up with when it comes to intelligent robots.

Fortunately for the robots of Retropolis, the city has a pretty responsible system. There’s oversight; there are penalties; and once they’ve paid off their indentures the robots are free people, just like human people. The robots themselves have formed the Fraternal League of Robotic Persons, and one of the League’s main functions is to pool member dues to help robots pay off their indentures.

But there’s always the possibility that things will go wrong.

If you build your own robots in a place that’s not known, not regulated, you can simply not tell your robots about indentures, or about freedom: they’re in your power. At that point you appear to own the robots themselves. At that point, you’re building slaves.

Here’s an embarrassing fact. It wasn’t until I was working on the book’s third draft that I realized the League system for paying off indentures is a lot like the system used by the Discworld golems. They aren’t exactly the same: the golems are considered property, so Pratchett’s Golem Trust purchases them outright and then makes them their own owners. But they are pretty similar.

All I can say there is that this Pratchett fellow was pretty smart, and so he got there ahead of me.

The best news of all for the Retropolitan robots is that the system of indenture may be coming to an end. They have a new President over there, and he has long-term plans for robot production that aren’t known to the human people of the city.

His plans aren’t secret. It’s just that the human people, content that they have a system in place, aren’t very curious about what the League is doing.

This entry was posted on Monday, May 1st, 2017
and was filed under Slaves of the Switchboard of Doom, Thrilling Tales of the Downright Unusual, Works in Progress
There have been no responses »