The Rusty memes: a robot’s handy aids for civil disagreement

One of the questions we’ve faced since the election has been “Yeah, but what can I do?”

What I do is almost as frivolous as sewing little tutus for Pomeranians. It’s pretty close.

So here’s where Rusty offered to help me out.

For a little robot who never speaks, the guy has a lot to say; and that’s fortunate because he’s so much smarter than I am.

In Rusty’s view we people who disagree have forgotten how to discuss the matters that divide us. There’s a lot of name-calling, a lot of impassioned pronouncements, a lot of derision of Those Other People. If we ever knew anything about having a civil, productive argument, that knowledge dried up and drifted away a long time ago. These days we just hand the torches to the villagers and get right down to burning.

So Rusty has suggested a series of memes to help to keep things civil, at least, and maybe even productive.

I think Rusty’s well suited to the task. First, he’s completely neutral. You can’t have much of a racial or cultural reaction to Rusty. And, second, he’s about the least threatening person I know. It’s hard to imagine Rusty making an argument worse. 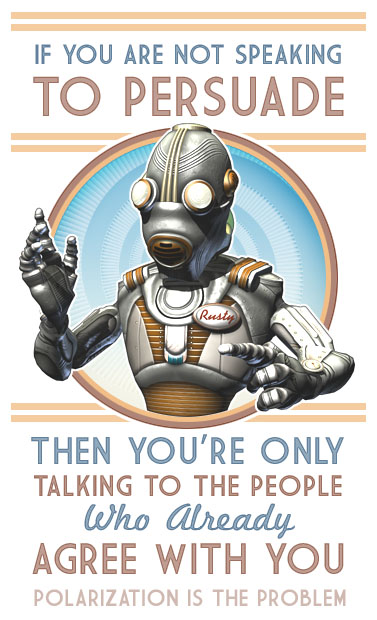 Here’s a thing I know. It’s almost unheard-of for people to change their minds. And they will never change their minds if you do nothing but yell at them. When you challenge a person’s convictions – whatever they are – they respond as though you’ve assaulted them personally. It triggers the exact same reactions in the brain.

A better way to persuade, which ought to be the goal, is to ask them why they think the way they do. And really listen to their answer. Talk to them about their answer. Then tell them, from your own personal experience, why you think differently. Keep it on that personal level, because what you have to do is let them see why you disagree. You need them to understand that a rational person can have valid reasons for thinking the opposite of the way they think.

If you can accomplish that, you’ve achieved conversation. Don’t stop.

Social media has helped us create bubbles in which we only communicate with people who think the way we think. People are shocked and defensive when some Other Kind of Person appears. But it’s only in talking to those Other People, and particularly in listening to them, that understanding is possible.

When neither side wants to understand, the only thing left is war.

If you use the meme above in response to a person who disagrees with you, it’s not likely to help (though it might!). But it may do some good for the people inside your own echo chamber. Remind them that preaching to the choir is a waste of their time. It’s a real weakness in activists of every kind. 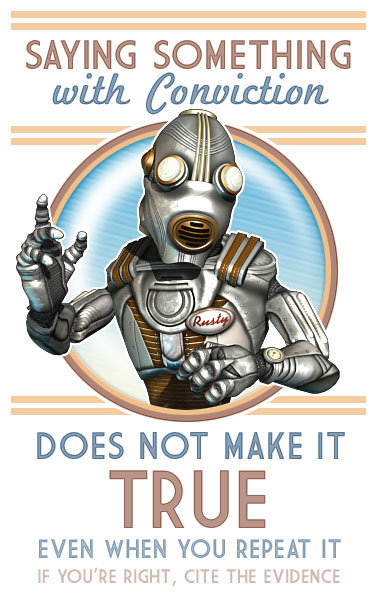 Obvious, but so necessary. And this one’s also a problem with echo chambers: because in your own personal bubble you can make forceful restatements of what all your friends believe, and everybody feels good about that. About themselves.

The problem is that so many things that “everybody knows” are downright false. These empty blanket pronouncements are a prime target for people who disagree.

So there you go. Rusty’s got a meme just for unsupported statements. 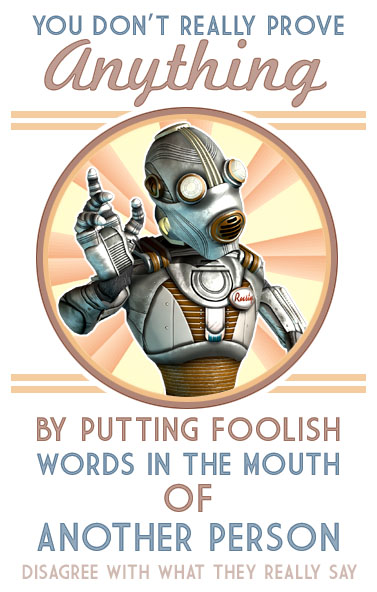 Of all the lousy tactics in arguments, the straw man is one of the two I like least.

The straw man argument is lazy. You don’t dispute the things that people have said, because that would be hard. No, instead you invent the most ridiculous possible paraphrase of what you claim they really mean; then you belittle and mock that paraphrase.

You use the straw man when you have no way to deal with the real opinions of real people. That says a lot more about you than it says about the people you’re “arguing against”.

If you’re right, and they’re wrong, it’s their actual words you need to address. Arguing with imaginary people is pointless and sad. 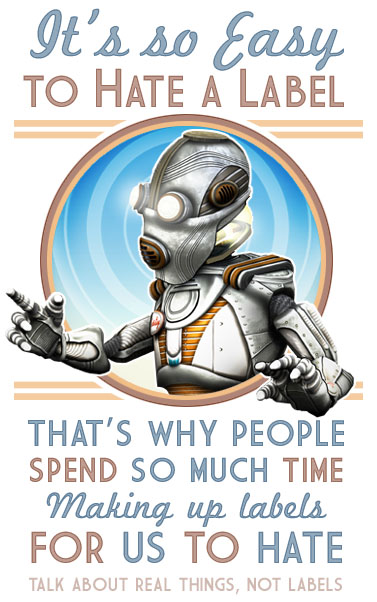 This is an area where congressional Republicans really hold the crown. Take an idea, or a piece of legislation, or an issue that you don’t like; make up a short, dismissive name for it that your voters are certain to hate; and use that label, and no other language, to describe the issue. It’s like the straw man in that you’re fighting against a thing you’ve invented rather than the real thing.

That’s why the Affordable Care Act is referred to as Obamacare; why the alleged results of that plan were called Death Panels; and why the inheritance tax is called the Death Tax. That last one’s my favorite: those who rail against the Death Tax are unaware that inheritance taxes were proposed and signed by a Republican president, for reasons that would surprise them.

Among the rank and file short, derisive names are applied to people, as well. “Obummer” for Obama is one example. And unfortunately the folks on the other side have begun to do this, too.

It’s relatively hard to hate a real person. But it’s pretty easy to hate a label, especially when that label was designed to make you hate.

Labels are simple; real things are complicated. You don’t get anywhere by debating a label. Real disagreements are about the things the labels misrepresent. 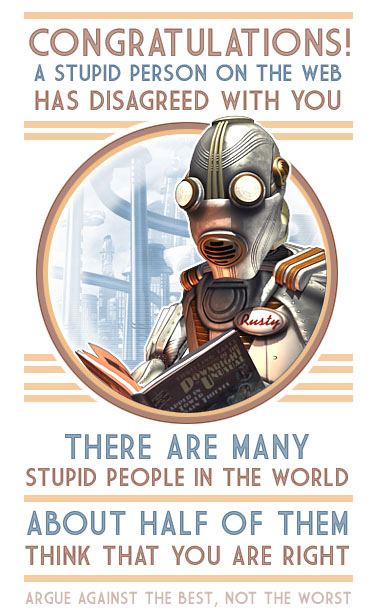 We all delight in seeing foolish statements by foolish people when those people hold the opposite side in an argument. So we repost and retweet and spread this evidence that our opponents are idiots.

So pointing out the stupidity of these people is pretty meaningless, isn’t it? It’s just one of those things that makes the folks inside your echo chamber feel superior.

Yeah, that’s an attractive thought. You feel good because someone else is stupid.

It’s also pretty easy to mock the stupidity of others. It’s far more difficult to address the arguments of people who are smart.

If you’re convinced that only stupid people disagree with you, there’s a pretty good chance that you are not one of the smart ones.

As far as Rusty and I can manage, these memes don’t favor any biases, especially not my own. They’re intended to be completely neutral and suitable for users with any opinion.

Because the goal is not to score points. The goal is to elevate discourse.

So use them if you like, but I hope you’ll use them in their intended spirit: not to “win”, but to guide discussions toward a genuine conversation.

If you want to cheat, though? Use these only on the people with whom you agree. Who knows? Your side may pull ahead in the the arms race.

This entry was posted on Tuesday, January 17th, 2017
and was filed under Can't Stop Thinking, Works in Progress
There have been 2 Responses »

Good stuff man. Long time fan of your art (still rocking my “death ray” tshirt) and new fan of your ideas here. Thanks for the post!

You’re certainly welcome. As the year’s gone on, I’ve become less and less optimistic for the future of civil disagreement, though. Erk.