Starting Wednesday: Ben Bowman in the Vault of Terror 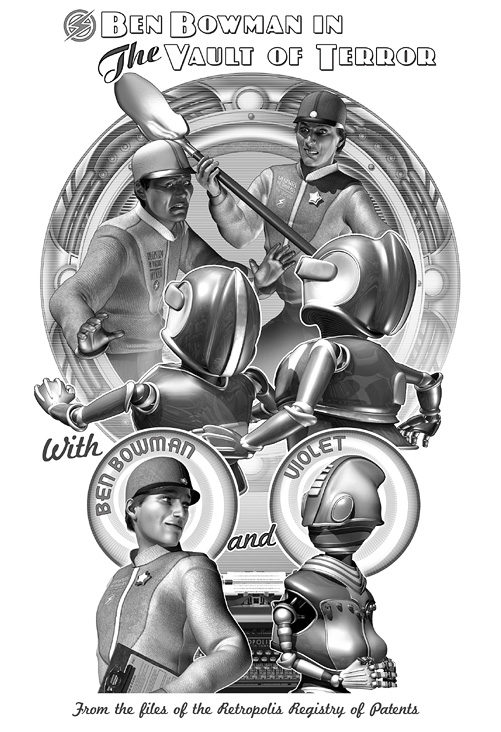 What do you do after you’ve dropped a building on your boss’ head? Well, in many cases, you rethink your life. There are also those who dance around the building, singing about it. But we pretend we don’t know those people.

Even at the Retropolis Registry of Patents there are several approaches to this kind of trauma. Violet, the Registrar’s secretary, is in the “rethink your life” camp; Investigator Bowman is off on a tangent of his own. He’d just really rather not have to spend any time down in the Registry Vault (the “Patent Registry Models and Samples Repository”).

Nobody likes to go down there. It’s full of the working models and prototypes for every invention that’s ever come out of Retropolis’ Experimental Research District. If you get posted down in the Vault, you can’t help knowing that at any time something really dangerous and irreversible is likely to happen. And when it doesn’t happen? Well, there’s a statistically identical chance that it’s going to happen now. That sort of thing can wear you down.

Meanwhile the Registry is expecting its new Registrar (again) and so that’s what’s on Violet’s mind. She’s made a resolution not to do anything to this one.

We’ll see how that goes, starting on Wednesday, in Ben Bowman in the Vault of Terror.

This entry was posted on Monday, November 28th, 2016
and was filed under Thrilling Tales of the Downright Unusual, Works in Progress
There have been no responses »