Some changes and housekeeping at Retropolis: the art of the future that never was 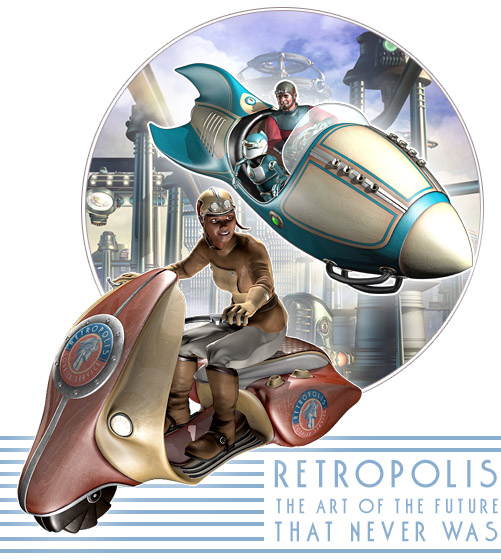 If there was a single cause – an inciting incident – for some of my recent changes at Retropolis, it was probably the loss of one of the vendors I use to make the merchandise I sell there.

But one thing led to another thing, and then there was this thing that popped up after that, and before I knew it I’d reworked some of the existing Retropolis pages. Is it over? Hard to say.

But I started with the home page, and then moved on to the bookstore page (a big improvement!) and just now I finished reworking the “About Retropolis” page, too. I made some minor changes to product images in the Retropolis Travel Bureau section. Some necessary surgery to the menus led to other changes. Like I said, one thing led to another.

“About Retropolis” really did need an update, once I thought about it. Now it’s got newer art and a slightly different and more interesting, and, frankly, laborious layout that no one but me may really appreciate.

There’s some lingering weirdness in the site’s overall layout (which dates from The Days of Browsers We Will Not Speak Of) and I could handle things in a far more sensible way today. But I don’t think I will. Even I am not that crazy. Not this morning, anyhow.

This entry was posted on Tuesday, November 1st, 2016
and was filed under Works in Progress
There has been 1 Response »

One response to “Some changes and housekeeping at Retropolis: the art of the future that never was”
Robert Eaglestone says: