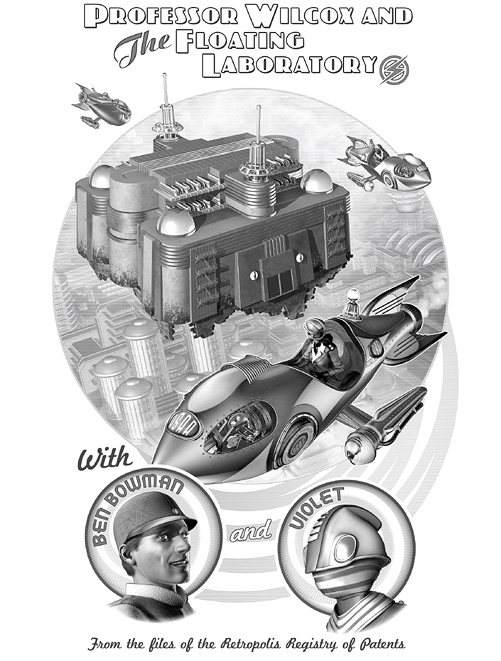 This Wednesday marks the beginning of the fourth Retropolis Registry of Patents story at Thrilling Tales of the Downright Unusual.

This time, Violet and Ben Bowman have to deal with the problems of Professor Wilcox and the Floating Laboratory. This story stands apart from the earlier Registry of Patents stories because it’s told almost completely from Violet’s point of view. Ben is active, but offstage, for nearly the entire time.

And this gives us a chance to take a closer look at Violet, and her quest for a promotion, and what that kind of promotion means to a robot who was designed to be a secretary. If her single-minded devotion to her goal seemed excessive earlier, you may find that it’s both more and less excessive than it seemed. Or you may find that she’s the most horrific employee a manager could imagine. A lot of this depends on your perspective.

There’s a cameo appearance by Grace Keaton, courier and graduate student; there’s an air traffic emergency; there’s an example of the lingering, malevolent feuds that can rise up to divide neighbors, especially if each of those neighbors is a mad scientist; there’s an imminent, terrifying threat to a fishing vacation; and there’s an office betting pool, because it’s an office.

It’s an almost ordinary day at the Registry of Patents. Starting Wednesday!

This entry was posted on Monday, October 17th, 2016
and was filed under Thrilling Tales of the Downright Unusual, Works in Progress
There have been no responses »