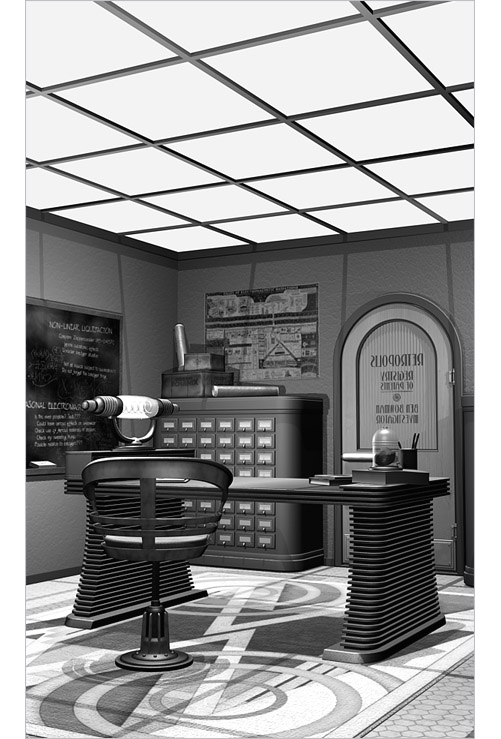 I learned the hard way not to build complete environments for my illustrations. If you’re making a game – with free-floating player characters and cameras – you really want to build the whole thing. I mean, you don’t want the player to turn around and see that the world stopped while no one was looking.

But I’m not building games any more. And I found, often enough to notice, that if I built a complete and seamless set for a picture I would spend forever on it; and at the end the results wouldn’t be as good as if I’d worried only about what background I needed for the pictures I was actually making.

There are exceptions. I built a complete in-the-round set for Doctor Rognvald’s lab in Trapped in the Tower of the Brain Thieves, for example; but I was going to be rendering a lot of pictures in that one environment. So it made sense.

I’m working now on the last illustration for Ben Bowman in the Vault of Terror (coming in late November!). Up to that point we’ve closed every one of the Registry stories back at Violet’s desk in the Registry of Patents. But there’s a Reason why that changes here, and for that same Reason we will spend a lot of time in Ben’s office when we come to the sixth and finalish Registry of Patents story.

So I’ve built three whole sides of Ben’s office. Will we ever see the back wall? No idea. That may be where he’s stashed his televideo phone: I couldn’t find it anyplace else. 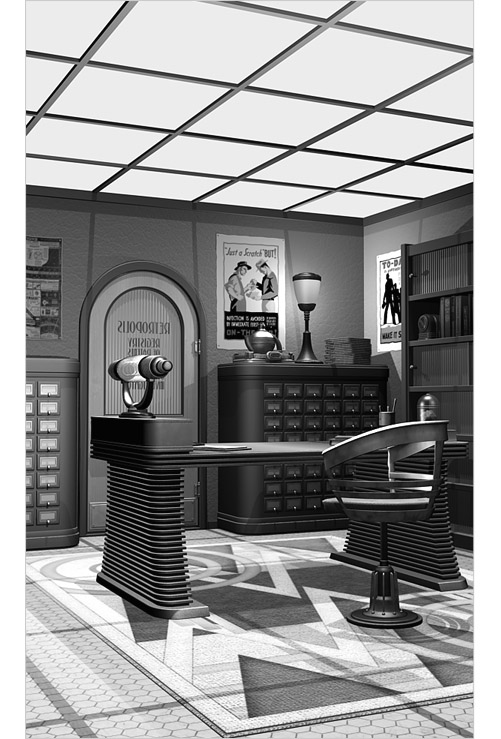 But apart from that mysterious back wall, we can see here the not-very-large office where Ben Bowman spends his days when he isn’t out in the field. He’s got a lot of books and manuals, stacks of files and boxes, and two whole card catalogs of… well, he doesn’t really know what’s in those. He never looked. I think there’s a pastrami sandwich somewhere in the right-hand cabinet, though.

There are industrial safety posters, because, well, of course there are; a science reference poster; and a blackboard. Also, I really like his carpet and I wonder where I could get one like it.

There’s a contrast between this working area and Violet’s. Ben’s a messy organic person, while Violet is mechanical and… not messy. But there’s also this: as a secretary, Violet’s desk is no more than the gateway to the Registrar’s office. She doesn’t really have a space of her own. So part of the difference we see is that Ben has staked a claim on his space, while Violet is still scheming to get an office where she might do the same thing. At that point, how would Violet’s office look? It’s an interesting question.

But I can guarantee that we won’t see an answer to it any time soon.

This entry was posted on Thursday, September 29th, 2016
and was filed under Thrilling Tales of the Downright Unusual, Works in Progress
There have been no responses »