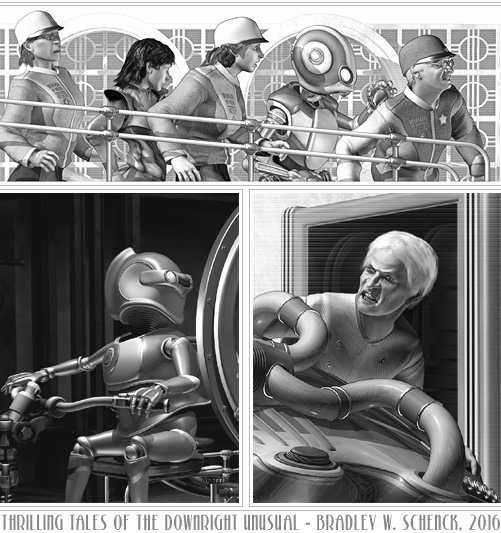 If today’s mysterious snippets center on themes of escape and retaliation, that’s all due to August’s attempts to melt the Secret Laboratory around my ears. But I’m on top of it! It’s so seldom I get a chance to test my latest experiments on an entire month.

But apart from that these are more glimpses of things to come for The Retropolis Registry of Patents – in one case, not until the end of the year.

The fifth story in the series won’t begin until late November, and it’s a long one that will continue on into February. Which is nice, from a calendrical point of view, but if you do the math you’ll realize that I have to do more illustrations for that one (Ten! Count ’em! Ten!). And I’ve just finished the fifth, so the rest of the calculation is left as an exercise for the reader.

Meanwhile, this week things are about to take a turn for the more peculiar in Doctor Petaja’s Parlor of Peril.

In some ways I thought that Doctor Petaja was a perfectly good introduction to the series – maybe even better than The Purloined Patents of Doctor Brackett – but I like the way we meet Ben and Violet in Brackett, so I decided to let it stand rather than have us meet them after they’ve gotten to know each other. Maybe I’ve given in a little to Hollywood’s addiction to origin stories.

Example? Robert E. Howard never wrote an origin story for Conan. Conan doesn’t need an origin story. You know exactly who he is once you see him hit the world sandals-first and sword foremost. But each time Hollywood’s tried to adapt the poor Cimmerian they’ve felt that they had to explain to us how he got that way. Which, like I said, is completely unnecessary. How does a panther get that way? By being a panther.

Panthers aren’t impressed by origin stories. Panthers watch you become entranced by an origin story, and then they leap down out of a tree and eat you.

Aaaaand that’s totally out of left field, for which I also blame the August heat, and with that I had better let you go.

But keep an eye on Doctor Petaja this week. It may help with issues of job training and questions of whether you should really read the employee handbook.

This entry was posted on Sunday, August 14th, 2016
and was filed under Thrilling Tales of the Downright Unusual, Works in Progress
There have been no responses »