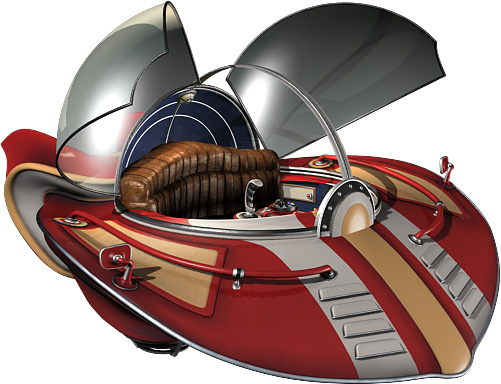 With its well-stocked cockpit, its stylish beetle-wing doors, and its incomprehensibly alien controls, this is the spaceship of Gzhurka – known, at least to himself, as The Great Gzhurka – and with this I kind of hope I’ve finished my weeks-long alien kick so I can get back to work on something else.

It’s really hard to deal with life when things keep spilling out of the Idea Closet.

I’m not really complaining. I mean, there are all those other days when the Idea Closet’s door gets stuck and I’m left standing just outside, listening to the soft rustling of things in there that I can’t quite identify. Which is sort of spooky.

But now at least I’ve figured out who this little guy is; I even know about something that happens to him. And I expect I’ll get to that later, when that makes more sense.

Later would be smarter. 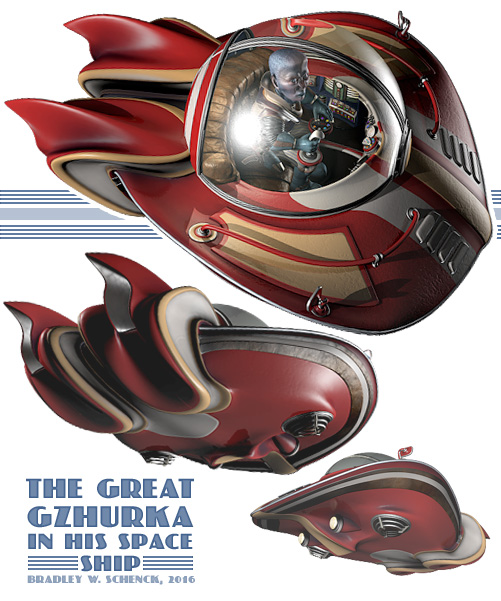 I still need to finish the illustrations for the fifth story from the Files of the Retropolis Registry of Patents; and then there’s the final story in that sequence to worry about too – though we won’t see that one for quite awhile. So it’s possible that Gzhurka will cut ahead in the line. He has very little regard for the feelings of other people.

This space ship is a bit different from my Retropolitan rockets because Gzhurka uses it for such long trips. Its cockpit has to be full of all the stuff that you need when you’re an alien who pretty much lives in his car. It’s the most complicated interior I’ve ever built for one of these and (of course!) along with its gizmos and cabinets and blinky buttons it even contains some reading material. Because that’s important.

And also later, right? Because later would be….

This entry was posted on Sunday, July 31st, 2016
and was filed under Works in Progress
There have been no responses »