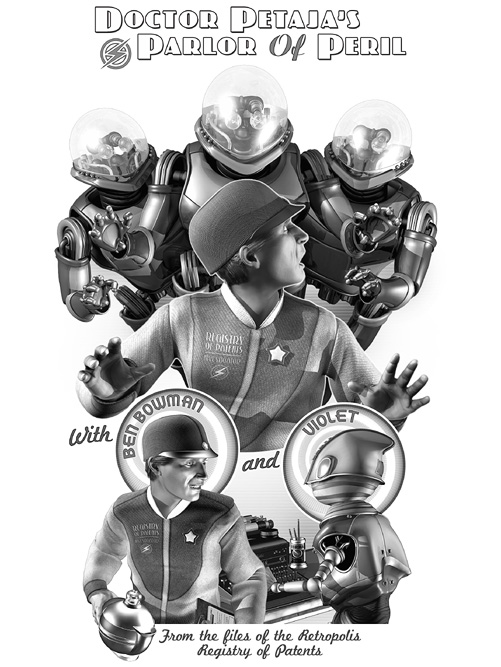 So in The Purloined Patents of Doctor Brackett we’ve encountered the Retropolis Registry of Patents; and while we were there we met Ben Bowman, Investigator, and Violet, the robot secretary who really ought to be an Investigator… and who intends to make that happen by any means necessary.

Office politics can always be a bit on the risky side. That’s never been more true than in the Registry of Patents.

Violet is resourceful and dedicated and – although she’s quite a nice mechanical person who makes an excellent cup of coffee – nobody’s ever mentioned to her that thing we call the Three Laws of Robotics.

But in addition to Violet’s next move on the new Registrar we’re going to see what can happen when one mad scientist floods the Registry with stack after stack of preliminary patent applications; we’ll wonder what that might mean, especially for the whales; and we may even find out what’s so important about the Registry’s regulation #527b. (Hint: it’s not the one about the "Procedure For Requesting Laboratory Egress".)

All this and more will be revealed in the weekly installments of Doctor Petaja’s Parlor of Peril at Thrilling Tales of the Downight Unusual. It starts on Wednesday.

This entry was posted on Monday, July 25th, 2016
and was filed under Thrilling Tales of the Downright Unusual, Works in Progress
There have been 2 Responses »

“Violet is resourceful and dedicated and”

and thereon hangs a tale.