This week: Welcome to the Retropolis Registry of Patents 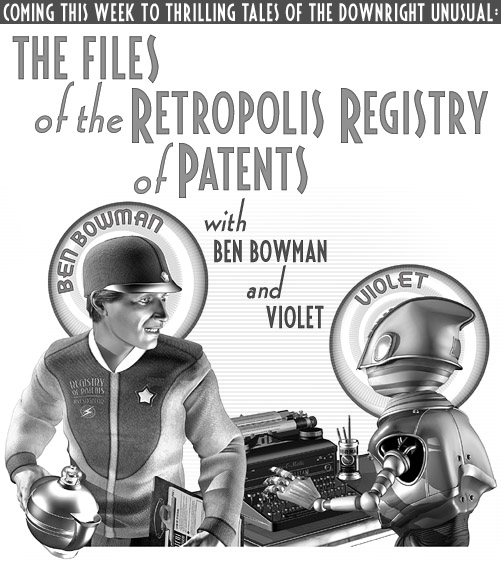 After a long hiatus, the serial stories at Thrilling Tales of the Downright Unusual begin again this Wednesday.

Welcome to the Retropolis Registry of Patents: a bureau of hard-working Officers and Investigators who file patent registrations for countless mad scientists – at no small risk to themselves – and who discreetly keep track of which deranged inventor is about to create an innovation so hazardous that it needs to be stopped.

Their work may be as insane as their clients are. But like any other person, whether human or mechanical, what’s really important to them is office politics.

This is a series of short stories – illustrated in glorious black and white! – which will run from six to ten weeks each.

We begin on Wednesday with The Purloined Patents of Doctor Brackett, in which we meet several people we’ll come to know in the series while we get our first look at the inner workings of this important, undervalued department of Retropolis’ City Government.

The serials will update just once a week; but because each update is around 1000 words you’ll get bigger weekly chunks of story than you saw in The Lair of the Clockwork Book, which updated twice each week.

Here’s the complete schedule for the year:

And after that? This schedule carries us into February 2017, so forgive me if I haven’t figured that part out yet.

I’ll probably have figured that out before the end of the year. In the meantime, enjoy what’s coming this Wednesday… and every other Wednesday for the rest of the year.

This entry was posted on Monday, June 13th, 2016
and was filed under Thrilling Tales of the Downright Unusual, Works in Progress
There have been no responses »