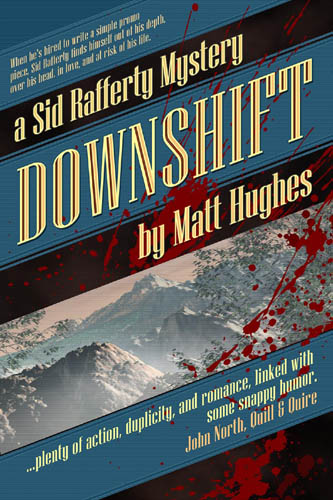 Over at his Archonate blog, Matthew Hughes has posted an announcement for the eBook and audiobook editions of his late-90’s mystery novel Downshift. There’s a comedy of errors about its first publication and the circumstances under which he wrote its sequel, Old Growth, which will also soon be republished under his own brand.

Then, three months before Downshift came out, my editor departed for another publisher– a nonfiction house, so she couldn’t take me with her. Immediately my print run was cut, my tiny promotional budget went to another book, and the marketing effort, except for library sales, was a few mouse-sized squeaks. Months later, when I asked if there were remaindered copies I could buy, I was told, “Nope, as the returns came in we sent them straight to the pulper.”

A paperback edition is forthcoming, which I know because (as usual) I laid out the book in mobi, ePub, PDF and print formats. This time I also did the cover, a nice match to the Old Growth cover that will also be coming along soon.

This entry was posted on Sunday, May 15th, 2016
and was filed under Found on the Web, Works in Progress
There have been no responses »