Slaves of the Switchboard of Doom: a mildly informative update 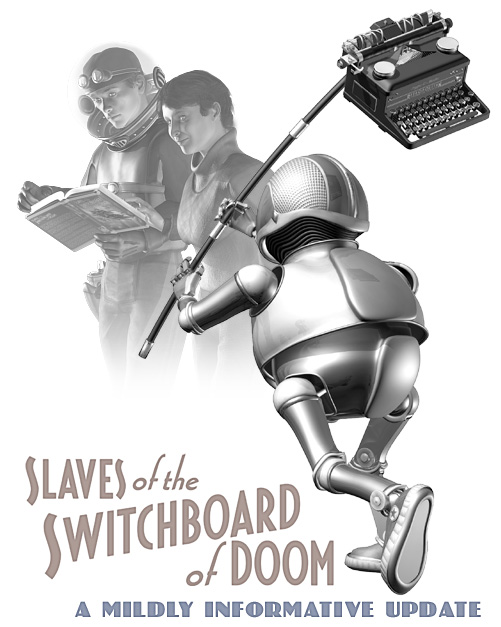 If you’ve been wondering what’s going on with Slaves of the Switchboard of Doom, well… so was I, for awhile. I thought I had reasonable expectations for how speedily the publishing industry moves. In this I was mistaken.

But March and April have seen a sudden burst of activity, a new release date, and the slow transition from my recent no expectations to my current cautious reserve.

The book’s new publication date – which I still consider a pleasant daydream – is March of 2017.

That date is looking more likely these days because the sales department has taken an interest. At some point their interest will turn into intent, penetrating looks directed at any part of the book that isn’t moving toward the release date, and once those intent, penetrating looks start darting around I think we can be pretty confident about the date. Nobody wants to get looks like those.

I’ve finished a couple of rough layouts for the book jacket and I expect I might start getting some looks of my own once everybody’s had a chance to see them. The dust jacket designs were a genuine blast to work on: they’re wraparound designs, so each one is a big picture that’s made up of five smaller rectangles that also need to work on their own. I really enjoyed working on them.

But I am looking at them while I’m typing – which is actually pretty difficult – and I can tell you that we’re probably going to have a pretty nice cover.

This entry was posted on Monday, April 18th, 2016
and was filed under Slaves of the Switchboard of Doom, Thrilling Tales of the Downright Unusual, Works in Progress
There have been 2 Responses »

2 responses to “Slaves of the Switchboard of Doom: a mildly informative update”
Andy James says:

I have been hearing about your book Slaves of the Switchboard of Doom. I can’t seem to find what it’s about. The artwork is absolutely first rate. Where can I go(be nice)to learn what the book is about.

I’m not sure what more information you’re looking for; you’ve been to Retropolis, so you’ve seen what I have to say there on the home page and the bookstore page; there’s also a long-running series of posts about the book right here at my blog, which started around the time I finished the first draft.

It’s possible that more will be said about the plot in reviews. The first advance copies are going out right about now to outlets like Publishers Weekly, Kirkus, and The Library Journal. I’m sure we’ll all have a bit more to say when the publicity ramps up around the end of March. But the coverage to date pretty well describes the setting and the events that kick the story off.