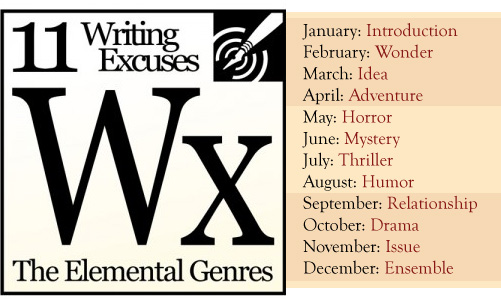 Okay, fair warning: there’s a lot to be said for not knowing how stories work. The more you understand about the mysterious innards of just about any thing, the harder it is to just sit back and enjoy that thing. You see that a lot if you happen to know people who work in film or television.

But if you’re the kind of person who will read the ingredients on a package of chorizo and still buy it, the Writing Excuses podcast is pretty interesting.

This isn’t the genre you probably expect. They’re not discussing “Bookshelf Genres” like mystery, romance, science fiction, or fantasy: they’re looking at themes and tropes that work independently of those categories. So, for example, Ant-Man is a superhero movie that’s also a heist film.

There are a gazillion kinds of stories that can be told in any Bookshelf Genre. And inside any one of those gazillion stories you find threads and subplots and themes that play to different sets of expectations: there may be romance within, well, anything; or elements of mystery, or horror, or adventure.

Season Eleven kicks off this week with an introduction to the whole idea. That’d be a swell place to start what looks like a pretty great season.

This entry was posted on Thursday, January 7th, 2016
and was filed under Found on the Web
There have been no responses »