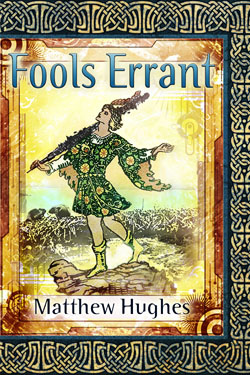 and Fool Me Twice

As with most of Hughes’ self-published editions, the cover paintings are by Ben Baldwin. I just adapted them to the book’s shape, which I did here with knotwork borders.

From the description of Fools Errant:

Foppish young Filidor Vesh wants only to dally among his shallow pastimes. But a simple errand for his uncle, the vaguely all-powerful Archon of those parts of Old Earth still populated by human beings, becomes a frenetic odyssey across a planet speckled with eccentric nations pursuing odd aims with intense determination.

Harried at every step by the irascible dwarf, Gaskarth, and frequently at the peril of wild beasts, enraged mobs and a particularly nasty thaumaturge, Filidor makes a relucant progress toward a final encounter with an ancient and possibly world-ending evil. 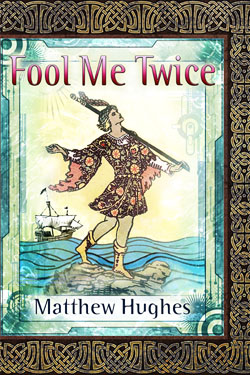 Fool Me Twice continues the adventures of Filidor – who we’ll see again, in the Hapthorn novels and elsewhere – in his new position as apprentice to his uncle, the Archon. Once again we have travels to far and peculiar corners of Old Earth – in what’s remarkably like the last age before Jack Vance’s Dying Earth – while Filidor “must cope with philosophical pirates, prophet-seeking aliens, light-fingered mummers, and a tiny, bothersome voice in his left ear.”

As always, lots of fun. If you’re more of an ebook reader – I don’t judge – you can also get the books in electronic form through your favorite outlet or at Hughes’ own Archonate Bookstore.

This entry was posted on Tuesday, November 10th, 2015
and was filed under Works in Progress
There have been no responses »