Revenge of the imaginary editor 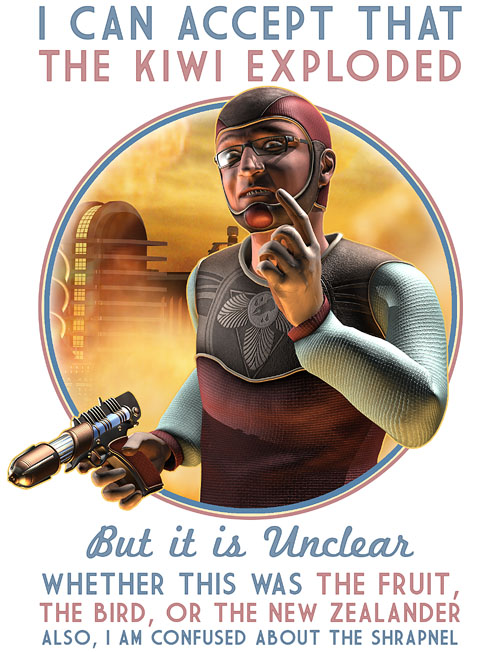 If you haven’t met this evil twin of my actual, non-imaginary editor, try looking here. No promises, but it might help.

Second things second: my imaginary editor has raised an important point. One has to be careful with words, and especially with names. The fact is that on my second pass through Slaves of the Switchboard of Doom I saw that I’d given the same first name to two different secondary characters. In each case, that name had seemed perfect. But those duplicate names would have stood out in a way that certainly didn’t serve the book; so one of them had to become Evelyn. It wasn’t a fate worse than death, or anything.

Things are even more confusing in the case we see here. A Kiwi is a Kiwi is a Kiwi, but if two or more kinds of Kiwi appear together you ought to have a good reason for it; and you should make it clear which one is which, unless confusion is the actual point. Example: if three Kiwis walk into a bar and one of them explodes, it should normally be clear whether that was the fruit, the bird, or the New Zealander.

All of this is pretty obvious. So in a scene where I blew up one of three otherwise non-flammable Kiwis I should expect that the reader might be confused.

Third things third: I haven’t done that. There is no scene in Slaves of the Switchboard of Doom in which a Kiwi explodes. The reason I know that, even without looking, is that there are no Kiwis in my book. Not a bird, not a fruit, and not a New Zealander. They just aren’t there. Baboon? Yes. Something sort of like a squid? Yes. Kiwi? No.

This seems to confirm what I’ve suspected for several weeks now. My imaginary editor is editing an imaginary book.

I don’t know what to do about it. For the past six weeks I’ve been doing my best to act on these editor notes, and now I discover that they’re not even for my book.

I guess I have an obligation to look for the imaginary author who should have been getting these notes. Somewhere there’s an imaginary contract whose delivery dates depend on these changes. I just don’t know where to start.

This entry was posted on Wednesday, September 16th, 2015
and was filed under Imaginary Editor
There have been no responses »