Cover art for the 1941 Retro Hugos, over at Amazing Stories 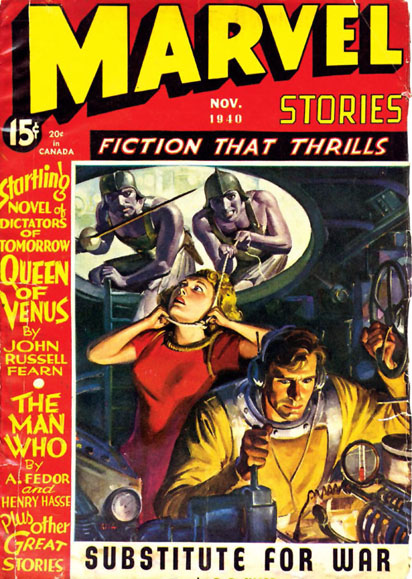 Over at the Amazing Stories web site Steve Davidson has been posting works eligible for the 2016 Retro Hugo Awards. Because these are the Retro Hugos the works were all published in 1941 1940.

The Hugo Awards were begun in 1953 and then continued from 1955 to the present day. The Retro Hugos, which are a recent (and optional) addition, celebrate works that were published before there was a Hugo Award. Don’t worry: it’s probably quantum.

The awards are organized by the year’s Worldcon convention committee. Since a different committee runs the show each year there are some years when we see a Retro Hugo, and some when we don’t. Next year, we will.

I’ve been interested in the earlier lists of eligible authors and publications/editors but the latest – the eligible cover artists – is the one I’ve enjoyed the most.

There are a lot of example images in that post. I found myself rooting for the lifetime achievers, particularly Howard V. Brown (right, upper) and Edd Cartier (right, lower).

But based purely on these covers from 1941 1940? I found that I really appreciated the covers by J. W. Scott (top). I guess that if I were voting purely on the output for that single year (which is what one should do), I might lean in his direction.

But its not like there aren’t a lot of other perfectly reasonable candidates in there. They’re all worth a look.

This entry was posted on Tuesday, September 15th, 2015
and was filed under Found on the Web
There have been 2 Responses »

2 responses to “Cover art for the 1941 Retro Hugos, over at Amazing Stories”
steve davidson says:

correction: these are the “1941 Retro Hugo Awards”, which means that the works nominated will all be from 1940.

Thanks for the plug!

Oh, you’re so right! Basic arithmetic will be my downfall.