Ladies of Retropolis scramble for their rockets 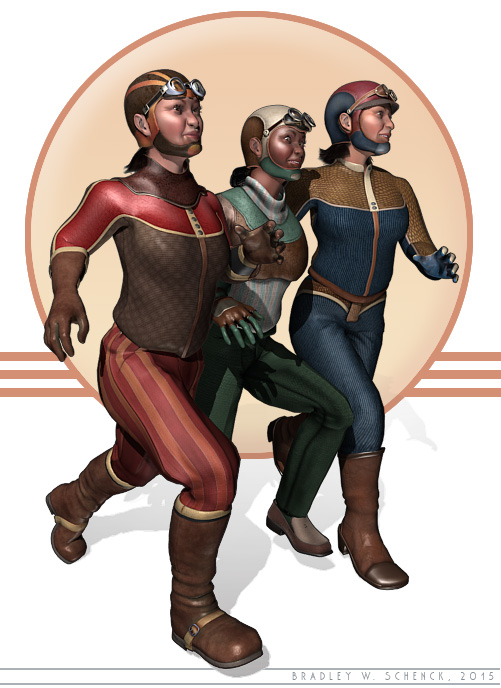 I’m probably winding down on my new Retropolitan character models, but these ladies just wouldn’t be put off. Wherever they’re headed they seem to be pleased that they’re on their way; my guess is, they’re scrambling for their rockets. You can tell by their aviator’s headgear.

Goggled female pilots were in a sad minority among my character models. There’s a pretty simple way in which I actually grow a cowl out of the male heads – but that same method doesn’t really work with my female heads. I could fix that, but it would be a long, painful process. So I fell back on a workaround that I’ve used just once before.

I was happy to do it: now I know these ladies will be fully equipped for their travels over the city. It’s a weight off my mind.

But like I said, I’m probably winding down now. There are a couple of other things that I really should be working on. But once I got on a roll with my characters I just couldn’t stop… until now. I think.

I guess we’ll just have to see.

This entry was posted on Saturday, August 22nd, 2015
and was filed under Works in Progress
There have been 3 Responses »

3 responses to “Ladies of Retropolis scramble for their rockets”
rainycity1 says:

…at least until another character starts niggling at the back of your mind, insisting on being included.

…because the last two children in Retropolis were such darlings…