is a book that offers lots of fun, from experiments in a supercollider to courtroom drama, with each of those threads entangled by a technology that projects quantum effects up to the classic, Newtonian scale. It’s fun for the reader, I mean; it’s more like the opposite of fun for its characters.

It’s hard to get specific here without being spoilery. 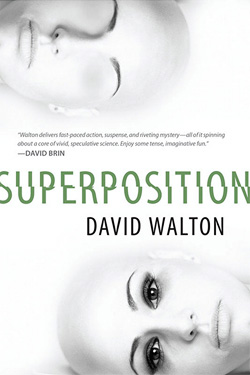 Once you’ve read the first few chapters you’ll understand one of the fundamental things about the book; like most everything else, this hangs on an effect of quantum physics. You won’t be sure how much more of that you’ll encounter as you go on.

The book could be seen as an expansion on the famous thought experiment of Schrödinger’s Cat – which is described, at one point – and the reader has to keep wondering just how many probability waves are collapsing (or not collapsing) as time goes on.

You ought to expect a certain amount of handwavery here, seeing as we don’t actually know how to edit the laws of physics on a local scale. This technology isn’t understood by the characters, either, so it gets a convenient pass. I was left wondering a bit about how a part of their own technology (“smart paper”) can run software that projects its effects into the physical world. This was a small, nagging bit that did bother me.

But by the time that comes up we’ve seen so much that’s (reasonably) inexplicable that this may not trouble everyone. Quantum theory itself is described in terms that even a common mortal – me – can understand. But what it does…!

Another lovely part of the book is also tied up with spoilers, but it concerns the family relationships that are wounded, patched up, and sometimes survive while the structure of reality is torn one way or the other. Superposition

succeeds on levels that aren’t limited to the quantum and classical.

This is the first book of Walton’s that I’ve read, but I’m now looking forward to its sequel (Supersymmetry

) as well as Quintessence

, an Age of Exploration tale in which science has proved that the world is flat.

This entry was posted on Sunday, May 31st, 2015
and was filed under Reading / Watching / Consuming
There have been no responses »