Speed of Light T-shirts: now in both metric and imperial units 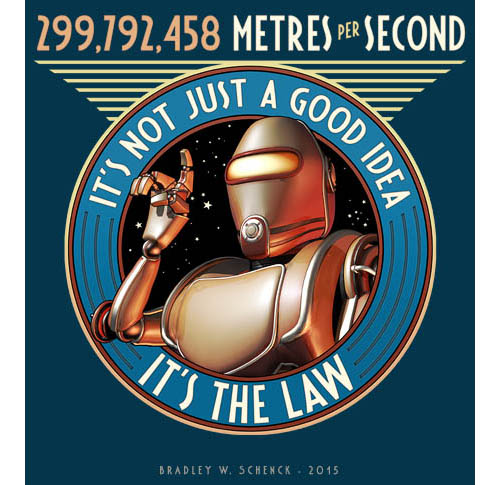 In what may (or may not) be my final T-shirt redesign for the Retropolis Transit Authority, we can now have our speed of light in two flavors: imperial and metric. Because a constant is a constant, regardless of your preferred unit of measure. Otherwise we’d call it something else, right?

I’ve worked out and tested my redirect system for the old Retropolis Transit links. The search engines may not quite catch on, but in the long run that won’t matter much since visitors to the old version will get whisked, as though by subatomic weirdness, to their new corresponding pages – except in the case of a retired design, when they’ll get whisked to the first page of shirts instead.

The whisking. I’m telling you, it’s the key to everything.

The reason I’m not sure whether this is the last redesign is that I just haven’t decided whether a couple of the old shirts will get a new version. We’ll have to see. And of course there can always be new T-shirts now that the big switch is complete.

For now, let’s simply be happy in the knowledge that we can have our speed of light and drink from it, too.

This entry was posted on Tuesday, March 24th, 2015
and was filed under Works in Progress
There has been 1 Response »

One response to “Speed of Light T-shirts: now in both metric and imperial units”
William D Starr says:

How about one that says

IT’S NOT A GOOD IDEA
IT’S JUST THE LAW