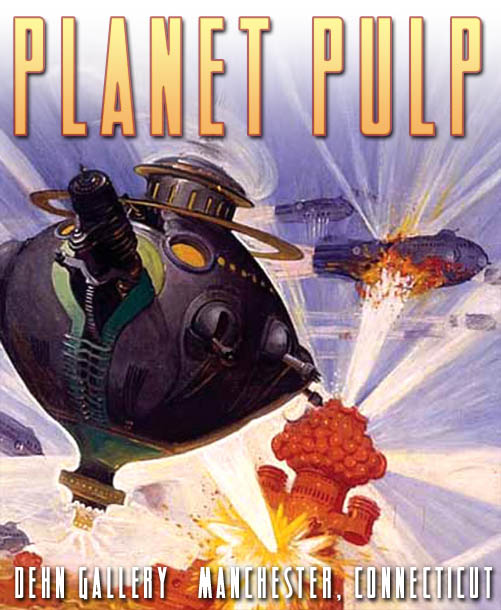 They thought they were supporting the arts. They believed their perspectives would be broadened by an exposure to mid-century illustrative art. They probably expected some Chablis and cheese.

They never expected the Pulp-O-Mizer.

Dehn Gallery curator Jane Rainwater admits in a rueful email that her brain, temporarily hijacked by thought worms from space, concocted a hellish plan through which the visitors to her Planet Pulp exhibit were subjected to the horrors of Pulp-O-Mization in what had appeared to be an innocent gallery opening. As yet there is no reliable report on casualties due to the many tentacles and cocoons that now obscure the site of the tragedy.

Dissenting journalists may report this differently. What’s known – and I mean here, what is known for certain – is that the Planet Pulp exhibit opened last night at the Dehn Gallery in Manchester, Connecticut. As part of the festivities, the gallery’s visitors were exposed to the Pulp-O-Mizer and they… played with it. And claimed that it was fun.

In the interest of public safety, the Pulp-O-Mizer has been removed from the premises and as a result it should be completely safe for visitors to view the thirty pulp science fiction covers in the exhibit. It should be safe.

No blame should be assigned to the paintings themselves, which are a part of the Robert Lesser Collection (New Britain Museum of American Art) and have, until now, never knowingly exposed viewers to Pulp-O-Mization or thought worms from space. The paintings are well behaved; they have no criminal records; and they’ll be in display at the Dehn Gallery through November 1.

These paintings have experienced a terrible trauma. Anyone in the area should pay them a visit and express their condolences.

This entry was posted on Saturday, September 20th, 2014
and was filed under Works in Progress
There has been 1 Response »

One response to “Unsuspecting gallery-goers submit to the power of the Pulp-O-Mizer”
Bridget McKenna says: