Out on the roof with Slaves of the Switchboard of Doom 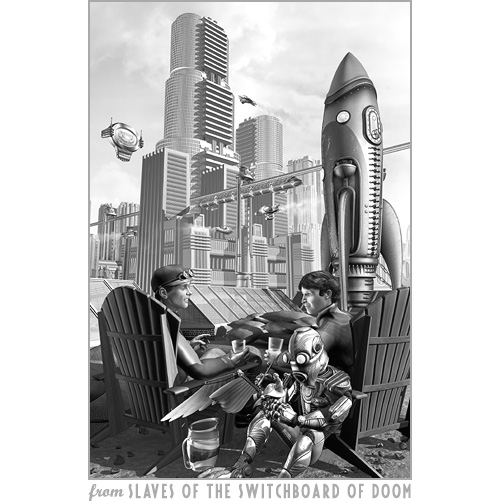 Here’s the latest illustration for Slaves of the Switchboard of Doom: this one’s for the final chapter in the book, though this isn’t the last illustration in the set.

One reason this picture took longer than most of the others was the little pigeon-like ornithopter in the foreground. The ornithopters show up many times in the story, but up to now I didn’t need them in any of the scenes I set out to illustrate. So here I was, nearly at the end of the long, long series, and I found that I needed an ornithopter after all. I spent several days building one.

The other reason this took awhile is that it’s not the picture I planned to do next. I thought I was going to work on the illustration for the first chapter. I continued to think that through three—or maybe even four—false starts, until I realized that I ought to set that one aside to simmer for a bit and do this one, instead.

It may be that I’d spent so much time thinking about the first chapter’s illustration that my brain had decided that This Is Really Important, and brains shouldn’t be allowed to think things like that, because when they do, things like this happen.

But my brain and I need to come to some kind of understanding about that now; the first chapter is the only one left to go. After that, I want to do some rework on about six of the existing illustrations, and after that, I have a pair of two page spreads to do. Those are meant to be sort of like endpapers: one at the start, and one at the end, and between them they should show us all the major characters in the book. Even with twenty-one illustrations there are a lot of people, both human and mechanical, who didn’t get their close-up. Or their long shot, for that matter.

And then (finally!) all the illustration work should be done and I can get back to worrying about what’ll become of the book. Because, you know, I haven’t been thinking about that. At all. Not me. Oh, no.

This entry was posted on Tuesday, September 2nd, 2014
and was filed under Slaves of the Switchboard of Doom, Thrilling Tales of the Downright Unusual, Works in Progress
There have been 2 Responses »

2 responses to “Out on the roof with Slaves of the Switchboard of Doom”
rainycity1 says:

I went and peeked… I really like what you’ve done with your Pseudoendpapers A.

(do you know that your CAPTCHA is case sensitive?)

I’m glad you like the Pseudoendpaper – it’s very different (and better!) than what I thought I was going to do.