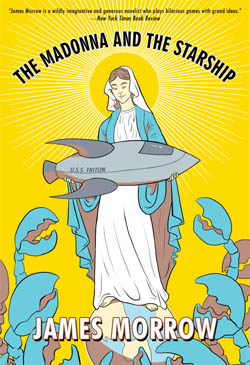 Over at Locus there’s an interesting emailed conversation between two writers I’ve discovered and enjoyed lately. They’re James Morrow (The Madonna and the Starship) and Daryl Gregory (Afterparty and the upcoming We Are All Completely Fine).

Their two recent books each deal in some way with faith or religion, but not from a standpoint you might expect. Neither book hands you a conclusion on the tension between faith and reason. But the authors take you to some pretty interesting places along the way.

I’m very fond of Henry Kuttner’s humorous stories. The Madonna and the Starship is the closest thing I’ve ever seen to a modern work in the vein of Kuttner’s Gallegher or Hogben stories: Morrow gives us bizarre aliens with bizarre intentions, and frenzied protagonists who have to find a way to deal with them. The book is straight out of Kuttner’s era, too, since it’s set in the live television studios of the 1950’s. It is about the most fun you can have in a philosophical novel, with or without big blue lobsters.

And that’s really what it is: a story about warring philosophies. If "warring" sounds like an exaggeration, I have two words for you: death rays. 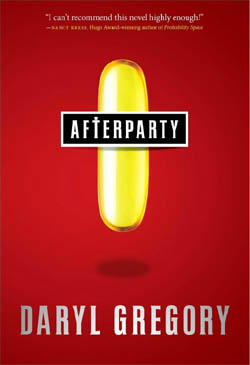 Afterparty isn’t that kind of screwball comedy. Afterparty introduces a drug that makes your brain experience religious certainty: it’s like the way that psychedelic drugs fire off the synapses that tell you you’ve just had a profound insight. ("Doughnuts… and zebras! Of course!")

People who take this drug are certain that there is a god, though that god varies from person to person. That certainty stays with them unless they stop taking the drug: this makes withdrawal a pretty serious matter. It’s not a good thing for an extremely religious person to find that god’s vanished.

And if you overdose? You actually see and hear your god, your angel, or your demon. All the time. Forever.

The drug’s been buried under patents that should prevent it from ever escaping into the world. But of course that’s not what happens. What does happen is very interesting.

Anyway, these are two great books that you should read right now, and there’s a discussion by their authors at Locus.

This entry was posted on Friday, July 18th, 2014
and was filed under Reading / Watching / Consuming
There have been no responses »