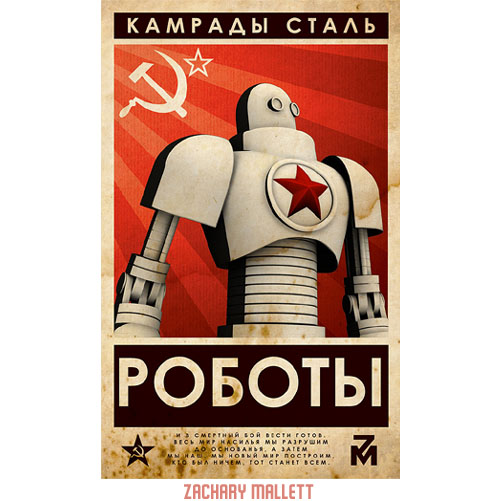 I’m all in favor of robots organizing and taking advantage of collective bargaining. The Retropolis Fraternal League of Robotic Persons is an important part of my book Slaves of the Switchboard of Doom; and, anyway, I salute any group of workers who band together in order to improve their working conditions. 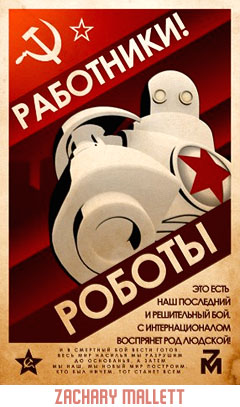 So even though I’m not convinced that full-blown robotic communism is viable in the long term, vulnerable as it is to dictators and bureaucracies, I still appreciate these handsome Comrades of Steel prints by designer Zachary Mallett. Because whatever your favorite economic system is, I think it’s important to follow it with style.

So above we have an iconic Comrades of Steel print, while on the right we see its fellow traveler, Workers of the World!

Either one’s a fine choice for that certain spot where your mechanical minions gather to oil up, exchange pleasantries, and plot the overthrow of their human masters. Kind of like an OSHA poster in the coffee room. But more beautiful.

And, since I mentioned it, what about Slaves of the Switchboard of Doom? Querying literary agents is pretty much like heaving a bunch of messages in bottles out into the waves. I’m keeping my bottles bobbing out there, but as I said earlier I have a pretty short list of agents on the principle that no agent is better than the wrong agent. So there aren’t too many bottles left to go.

Meanwhile I’m working on the illustrations. There’s enough work there to keep me busy through June or July; so I’ve got plenty of time left.

This entry was posted on Saturday, March 8th, 2014
and was filed under Found on the Web
There have been no responses »