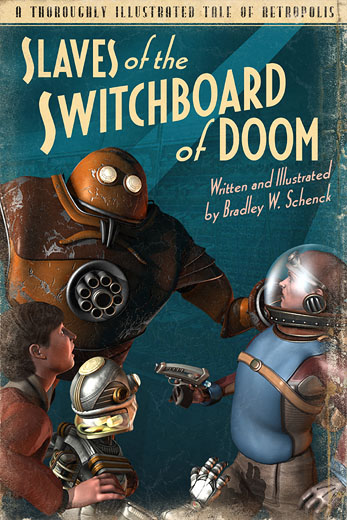 3 responses to “Slaves of the Switchboard of Doom: cover concept, synopsis, and progress report”
Uldi says:

I really hope you get picked up by a publisher, because then I could buy it at the bookstore. Hopefully with the illustrations.

I really do think there is a market for rocket-punk and more steampunk. I’ll be rooting for you!

As to the synopsis, “I want this book,” should tell you that I like it and it works. I’m really looking forward to getting to read it.

I’d like to see you get it in a bookstore, too. Of course… given the way publishing schedules work a traditional publisher would probably delay that by about a year (!). But as much as I like what print-on-demand publishing can do for us I still feel like that bookstore presence is the gold standard.

Oh, and as for the illustrations, the book really needs them. I could easily lose a fight for the cover design, but the illustrations just have to be there. Cutting those would be a deal breaker for me.