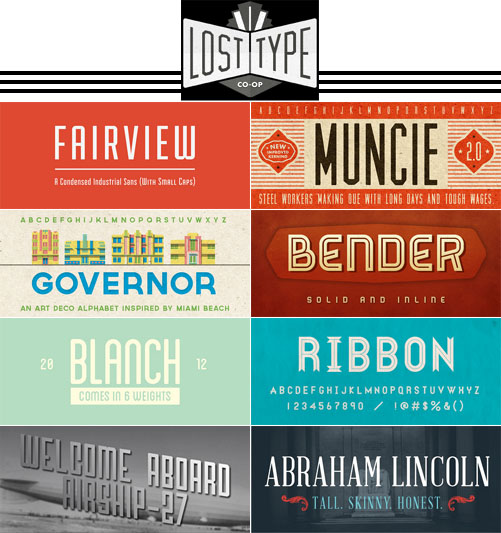 The Lost Type Co-Op is a group of typographers who sell their fonts directly to the customer through their web site, using a pay what you want model. The emphasis is on retro and industrial fonts and typefaces based on mid-twentieth century signage, and they’re awfully nice.

So nice that I’d like them all, in fact.

In most cases, you pay whatever you like for an unrestricted license. In a few cases there are tiers: so much for personal use, so much for commercial use. Licenses for web use as a font-face vary from one to another and are indicated by a distinctive graphic. Lost Type itself just passes the money on to the individual typographers; it doesn’t make any money on its own behalf.

I ran across their site while following a Twitter link that mentioned my Pulp-O-Mizer, and I stayed because, well, I couldn’t help it. There’s some really lovely work here, and the stories behind some of these faces are pretty interesting, too: for example, how a walk through San Francisco’s Mission District led to the creation of Mission Gothic.

This entry was posted on Friday, July 12th, 2013
and was filed under Found on the Web
There have been no responses »