Back Lawrence Watt-Evans’ new novel at Kickstarter, and it will get more and more art by me 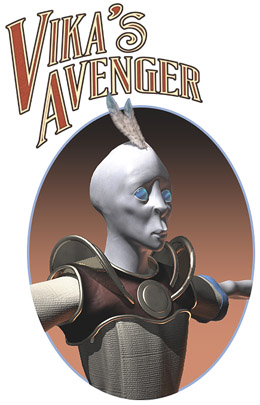 If you want to know what character this is a concept for, you’ll just have to hie yourself over to Lawrence Watt-Evans’ Kickstarter page for his science fantasy novel Vika’s Avenger and then plonk your money down on the table.

If you’re not as ancient as Watt-Evans and I am you may not know that "science fantasy" once described the sort of ray guns and airships adventure stories written by Edgar Rice Burroughs, Otis Adelbert Kline, Henry Kuttner, Leigh Brackett and many other authors; it’s the sub-genre of science fiction that later on led to things with bigger budgets, like that Lucas guy’s movies. It’s science fiction without the problematic physics; and although I like my problematic physics as well as the next guy, I also kind of like big four-armed Tharks scything down their enemies from the backs of their thundering thoats.

The Kickstarter campaign has met its original goal and now, if I’m counting correctly, two of its stretch goals. At least one of those stretch goals turned out to be me.

Yep, I’m happy to say I’ll be doing the cover for the book and – so far – three interior illustrations. Along the way I’m also doing the book design, but that bores you and so I’ll quickly explain that although I am now on board for the book I will be doing more and more illustrations… depending on how much money the project can raise.

So at the moment, we’re looking at the cover (in color) and three interior illustrations. But the project is just $1500 away from its next stretch goal and if it reaches that, well, I’ll be doing even more interior art for the book. That will continue up to some sane limit, so I won’t ever be doing more illustrations than there is text to go with them. Which would be strange.

But for the time being – and until we reach that limit of sanity – more pledges mean more illustrations (by me) and therefore more work (for me) and those are just two of the many reasons why you ought to go drop a dime on Vika’s Avenger at Kickstarter.

This entry was posted on Monday, July 8th, 2013
and was filed under Works in Progress
There have been no responses »