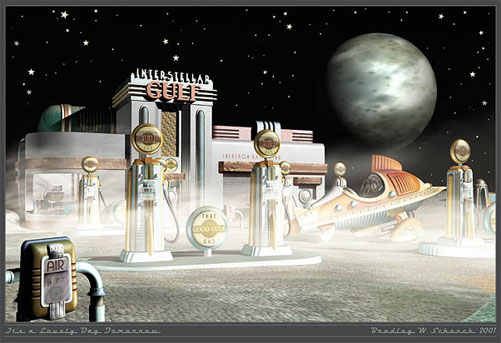 In an unlikely crossover, A&E’s Longmire is apparently coming to Retropolis. Tonight. He’s getting aspirin there, or something.

Awhile back I got an email from the production company behind the show. I hadn’t ever seen it at that time. They wanted a release to use two of my posters in what was called the "Pharmacy" set in Season 2, Episode 5; and unless they’ve changed the order of the episodes, that’s tonight.

(For those like me who don’t have television it ought to be showing up at hulu.com a week from tomorrow.)

Once I’d sent back the release I streamed the show, and I like it. It’s a modern day Western detective series set in Wyoming. What they’re going to do with the rockets out there… I have no idea.

And of course the prints are just set dressing, meaning that they’ll be somewhere on the set, but there’s no guarantee that the camera will spend any time near them. So, you know, don’t be upset if you examine every inch of the pharmacy and still can’t find them.

The other print they’re using is the old version of my The Future: it’s Not What it Used to Be. Once I’d lived with that one for awhile I decided to change it; so you can’t even get that version any more… unless I forgot it someplace!

Updated: Hey! I think I got it wrong, didn’t I? It must have aired last week, and it’ll be showing up on hulu tomorrow.

This entry was posted on Monday, June 24th, 2013
and was filed under Works in Progress
There have been no responses »